Dr. Nannette Bagstad, Mayville, N.D., served as a faculty member in the Division of Education and Psychology at Mayville State University from 1989 until 2012. During her career, she became fully tenured and served as chair of the division. Upon her retirement in 2012, she was granted the distinction of professor emeritus. Nannette was instrumental in the addition of the applied psychology and special education minors at MSU. She was co-coordinator of the Bush Grant that taught students and faculty the research-based methodology of critical thinking and cooperative learning. She taught teaching methods and special education classes, ensuring that graduating seniors were up to speed on the latest and best classroom methodology before entering the profession. As a respected member of the faculty, she was an integral part of the National Council of Teacher Education (NCATE) accreditation process, working with faculty to see that Mayville State graduates continued the university’s reputation for preparing excellent teachers. She was often a presenter at regional, national, and international conferences, sharing her expertise and experience with others in the field of education. Nannette worked to help the entire education program by mentoring new faculty. She encouraged and assisted colleagues as they adjusted to college teaching and pursued advanced degrees. Her efforts in helping her colleagues ultimately benefitted all students. Dr. Bagstad earned a Bachelor of Science in Education degree from Mayville State in 1965, and a master’s degree in special education and Doctor of Education degree from the University of North Dakota. 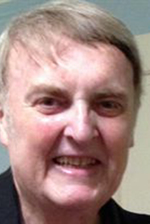 Jerold A. Bietz was a world-renowned researcher of wheat proteins. A prolific author and co-author of significant articles for noted professional journals, he was a frequent contributor to conferences, both at home and abroad. He was widely acknowledged to be a world leader during his brilliant scientific career in cereal science. He was named a fellow of the American Association of Cereal Chemists and received the William F. Geddes Memorial Award for service to his profession, and the Thomas Burr Osborne Medal, the association’s highest award for distinguished contributions in the field of cereal chemistry. In the words of his colleagues, “Jerry was a gentle and kind giant in the cereal chemistry research arena …. Many of us have stood on his shoulders.” Bietz graduated from Mayville State in 1963 with a Bachelor of Science in Education degree, pursuing majors in mathematics and composite science, and went on to study at the University of North Dakota on a three-year National Science Foundation scholarship. He graduated with a master’s degree, and then began a career at the USDA Northern Regional Research Center (the farm lab) in Peoria, Ill. Jerry Bietz passed away in 2014. His character was memorable in many ways, but particularly for his humility, honesty, generosity, friendliness, and great sense of humor. Jerry is remembered for his unique combination of a strong analytical mind, a great appreciation for art and music, his ability to tell the perfect story for any situation, his love of good food and drink, and his deep devotion to his family and friends. 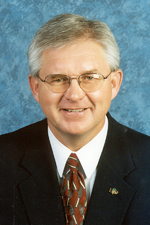 Randy S. Eken, Grand Forks, N.D., is Associate Dean for Administration and Finance at the University of North Dakota School of Medicine and Health Sciences (SMHS), where he is known as a dedicated, conscientious, hardworking, trustworthy, intelligent, kind, diligent, and loyal employee. He began his career at SMHS in 1979 as an accountant, and was promoted to Director of Fiscal Affairs in 1983. He became Associate Dean in 1996. Since he began his career with the SMHS, the budget has more than tripled, to around $90 million annually. He received the Meritorious Service Award in 1990, being recognized as an individual who best reflects honor upon the university and community through a combination of job performance, relationships with associates, and the ability to relate their work to the missions and values of the University. In 2012, Randy received the Hippocratic Dignity Award for his tireless dedication to the school and for being devoted to ensuring students have opportunities to fulfill their career goals. He has served on numerous search communities at the University of North Dakota and the SMHS. He has overseen a plethora of building projects as well, and is currently the building chair for the new School of Medicine and Health Sciences, which is nearing completion. He was instrumental in securing the $124 million in funding needed for this state of the art facility, and has worked tirelessly to ensure the effective planning and execution of the design for his unique facility. Randy graduated from Mayville State in 1978 with a Bachelor of Arts degree in business administration. He earned the Master of Public Administration degree from UND in 1996. 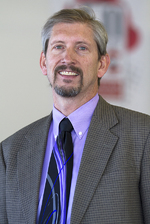 Alan Larson, Tempe, Ariz., is executive director of the Maricopa Skill Center and Vice President of Strategic Partnerships and Workforce Innovation at GateWay Community College, Phoenix, Ariz. Before this, he was with Central Arizona Governments, where he supervised economic, workforce, and community development programs for a consortium of municipal, county, and tribal entities. Larson was the Coleman Foundation awardee for Entrepreneurship in Community College Education in 2010, for his multidisciplinary approach to infuse entrepreneurship at his learning college. In addition to his work at GateWay Community College, Al, together with his wife, Rhonda, owns Leaps and Bounds Pediatric Therapy Center, an agency that provides services for children with disabilities, and Veloce Ventures, Inc., a holding company of their business properties. Al is the chief financial officer for Leaps and Bounds. He has been active in the communities in which he has lived. He has been an East Valley Think Tank member, vice president of Pinal County United Way board of directors, member of the Bishop’s Council at St. James Episcopal Church of Tempe, Ariz., volunteer with Valley Big Brother Big Sister, board member with Success by Six, and a proud supporter of Hogar de Vita, Children of Promise International. The original Captain Comet, Al graduated from Mayville State in 1986 with a Bachelor of Science degree, majoring in business administration and computer information systems and earning a minor in accounting. He earned a master’s degree in public administration from University of North Dakota. 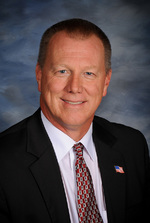 Dale Norton, Pahrump, Nev., lives by the motto “lead by example.” He has been a school administrator in Nye County School District (NCSD), the nation’s largest geographical school district, located just outside of Las Vegas, Nev. for 26 years. He has just completed his fourth year as the superintendent of schools. He made the decision to join NCSD when he accepted the positon of principal at Amargosa Valley Schools for Kindergarten through eighth grade. This school is a remote underperforming rural school of 190 students, primarily Hispanic. Little did he know he would be involved with the same school again as the superintendent of a nearly one million dollar School Improvement Grant (SIG) and be in a national spotlight of the Journey’s Project from WestEd, featuring the work being done at that particular school. He opened a brand new building as principal of Rosemary Clarke Middle School, NSCD’s largest middle school with more than 1,200 students in attendance. During his four years as principal of Rosemary Clarke, Dale was selected as Nevada’s Middle School Principal of the Year. He received his state award in Washington, D.C. in the fall of 2005. According to Dale, the plaques and accolades are not his greatest rewards. The greatest reward is to have a former student come up to him and tell him something about himself. He cares about his former students and likes to learn more about their lives today. Dale graduated from Mayville State with a Bachelor of Science in Education degree in 1981, earning a major in elementary education and a minor in physical education. He earned a master’s degree in school administration at Northern State in Aberdeen, S.D.

Douglas Petersen, Mayville, N.D., continues to be a Comet through and through, years after his graduation from Mayville State in 1993. He was active while he was a Mayville State student and has continued that activity into his role as an alumnus. A member of the MSU Foundation board of directors since 2014, Petersen is a staunch supporter of Mayville State University, attending events, providing financial assistance, and assisting in any way he can. Petersen is president of Citizens Insurance Agency, headquartered in Finley, N.D. He is a member of the North Dakota Professional Insurance Agents business association and has held several leadership positions within the organization. He was named the NDPIA Insurance Agent of the Year in 2012. Doug earned a Bachelor of Science degree from Mayville State in 1993, with a major in business administration and a minor in accounting.