A Sparkling Affair 2016 is a dazzling experience 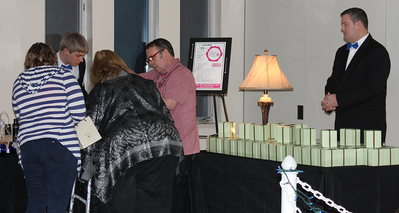 The first order of business during the main event was the drawing for the Razzle Dazzle Raffle prizes. This pre-event raffle was made available to the general public well in advance of the event, and winners did not need to be present to win. Christa Strand won the grand prize, a two-tone diamond ring donated by Riddle’s Jewelry. Donald Grage won a champagne glass bead necklace and earrings set created and donated by Debbie Hagen. Carla Swanson won a druzy stone pendant and ring set donated by Jen Kohls. 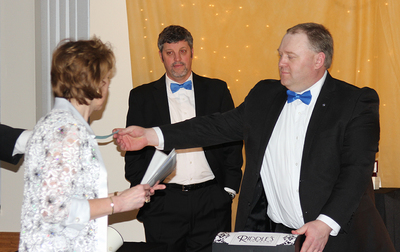 Those who attended the A Sparkling Affair event could take part in a number of games and activities throughout the evening, each giving an opportunity to win a variety of prizes, including jewelry items that were beautifully handcrafted by local artists Jennifer Kohls, Debbie Hagen, Lisa Rakowski, Shari Schultz, and Helen Hoyt.

The Gigi’s Cupcake Walk game was sweet! One hundred delicious Gigi’s Cupcakes were neatly packaged in individual boxes which attendees could purchase, along with a chance to win fabulous pamper-yourself prizes. Purchasers were eager to open their boxes and learn if they had also won one of many wonderful prizes, valued at $35 or more each. 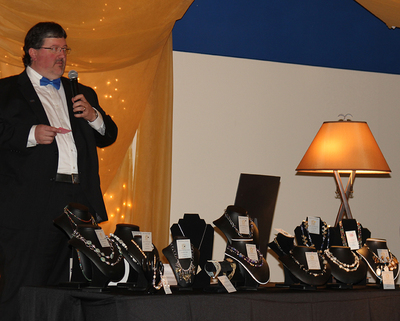 of Life, Toni Jacobson of Jacobson Studio, and Jody Stevens of Sheer Impressions.

New to A Sparkling Affair this year were the Luxurious Sparkling Lounge and the Wine Cork Grab. Folks who attended the pre-event social from 6:30 to 7 p.m. in the Campus Center Foyer, had an opportunity purchase raffle tickets for a chance to experience A Sparkling Affair from a designated posh lounge area in the Luckasen Room. Lori Morkve was the lucky winner, and she and five friends enjoyed the evening in the VIP lounge area of the Luckasen Room.

In the Wine Cork Grab, A Sparkling Affair attendees could purchase the chance to grab a cork from a bucket. Several of the corks were marked to indicate prize winners. Prizes were provided by Top Hat, Stub’s Bar, Happy Harry’s of Grand Forks, PLS, Tommy’s Sports Bar/Pizza Shop, Brudvik Law Office, and the MSU Alumni of Pembina County/Hoople. 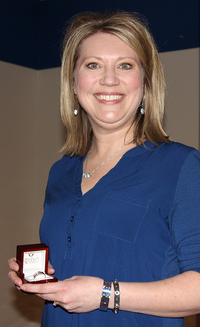 As the evening progressed, anticipation of the Riddle’s Extravaganza prize drawing grew. In the meantime, guests enjoyed fabulous hors d’oeuvres prepared and served by MSU Dining Services Director Bryan Karolus and staff while visiting and hoping that their names would be called during the door prize drawings for hand-crafted jewelry items which took place throughout the evening.

At last, the grand finale to a wonderful evening had arrived - the drawing for the Riddle’s Jewelry Extravaganza prizes. Bernie Hagen, manager of the Riddle’s Jewelry store in Grand Forks, N.D., drew the names. The grand prize winner’s name was drawn first, but set aside while the names of the consolation prizes were drawn. Consolation prize winners were Ernie Strube, who won a diamond necklace, and Nancy Lunde, who won diamond earrings. Amy Sand won the grand prize, a custom crafted diamond ring.

The event brought in more than $9,000. Net proceeds will benefit Mayville State students through the annual fund drive. This support will be of great help where needs are the greatest at Mayville State. This was the fourth year for A Sparkling Affair. The event was founded in 2013 by Jennifer Kohls, Debbie Hagen, and Loree Stenehjem.

“We are very happy with the results of this year’s A Sparkling Affair,” said Dena Bergstrom, MSU Foundation Annual Giving Coordinator/Phonathon Associate and organizer of the 2016 A Sparkling Affair event. “This has been a very fun and exciting way to raise annual fund support for Mayville State University. Thank you to all who purchased tickets, attended the event, donated prizes, and who helped in any way. We are truly grateful.”

“Our local jewelry crafters put their hearts and souls into creating jewelry that dazzled the crowd at the A Sparkling Affair event,” said MSU Foundation Executive Director John Klocke. “We truly appreciate their generosity and hard work that is so important to Mayville State University. A huge ‘thank you’ goes to Riddle’s Jewelry of Grand Forks, N.D. for sponsoring the event for a fourth year with their donation of more than $8,500 worth of beautiful jewelry. We are incredibly fortunate to have so many wonderful Mayville State supporters!”

Top: The Gigi’s Cupcake Walk was a popular game at the Feb. 25 A Sparkling Affair event. Mayville State student Brock Sherva can be seen on the left assisting customers and they choose one of the many prizes available to winners in the game.

Second: Bernie Hagen (left), manager of Riddle’s Jewelry in Grand Forks, N.D., assisted with the drawing of names of winners in the Riddle’s Jewelry Extravaganza, the grand finale for the evening. Also pictured are event hosts Corey McGillis (center) and Mark Kloster (right).

Third: Event host and emcee for the evening, Doug Petersen, prepares to read the name of a door prize winner. Door prize winners could choose one of eighteen jewelry pieces hand-crafted by Debbie Hagen and Jennifer Kohls.

Bottom: Amy Sand was the grand prize winner in the Riddle’s Extravaganza. Her prize was a custom crafted diamond ring, which was one of the beautiful jewelry pieces donated by Riddle’s Jewelry of Grand Forks, N.D.