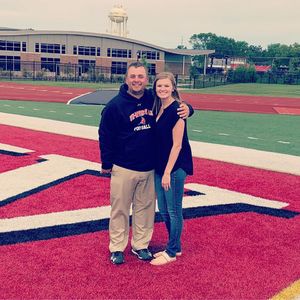 Rocky Larson, River Falls, Wis., has been named head football coach at Mayville State University. He will begin his duties on Feb. 4, 2020.

The public is invited to meet Coach Larson at a press conference planned for Tuesday, Feb. 4 at 5 p.m. It will be held at the Edson & Margaret Larson Alumni and Leadership Center at Mayville State University, located on the corner of Third Avenue and Stan Dakken Drive, Mayville.

“We welcome Coach Larson and his fiancé, Richell, to the Comet Family,” said Mayville State Athletic Director Ryan Hall. “I am excited for Coach Larson, who began coaching ten years ago. He is ready for the challenge as head coach for the Comets, and will lead the charge to improve upon Mayville State Football. He’ll hit the ground running so we’ll be ready for the 2020 season.”

Rocky Larson just finished his fourth full year as the defensive coordinator at the University of Wisconsin River Falls (UWRF). In his time at UWRF, Coach Larson had 15 all-conference selections, including the Wisconsin Intercollegiate Athletic Conference (WIAC) player of the year and 3rd team All American.

Prior to his defensive coordinator role at UWRF, Larson was the defensive back coach at the University of Wisconsin La Crosse, where he coached the WIAC leader in tackles.

Throughout his college career at UWRF, Larson was a student coach, coaching a different position group each year. Larson graduated from the University of Wisconsin River Falls in 2014 with a degree in Exercise Sport Science. In 2016, he earned his master’s degree in Athletic Administration/Coaching from Concordia Irvine University.

Larson will marry his fiancé, Richell Mehus, this summer. He is the son of Bruce and Kelly Larson from Somerset, Wis. Rocky has a brother and sister, twins Reggie and McKell Larson, and another brother, Gaelin Elmore.