President Hagen gives state of the university address, announces he will retire in 2018 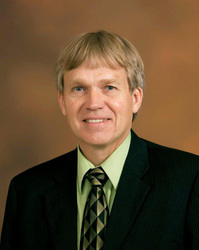 Mayville State President Dr. Gary Hagen gave his annual state of the university address on Wednesday morning, Aug. 16 before an audience of MSU faculty and staff and a handful of community members. The Classroom Auditorium was nearly full as faculty and staff gathered for pre-service workshops, traditionally held during the few days prior to the start of the fall semester. (Classes begin at 4 p.m. on Monday, Aug. 21.)

Hagen started out by saying the state of the university is once again very good. He took the audience down memory lane as he gave highlights from each of his state of the university addresses, which began in 2006, when he became Mayville State’s 16th president. The highlights underscored Mayville State’s evolution over the last 11 years, from a very small, traditional campus in 2006 to a very viable, growing campus. It was a time of reflection for those who have been on the journey, while giving newer employees a nice history lesson.

In addressing the faculty and staff in 2006, President Hagen said, “Our ship (campus) is now very old and its design has become quite obsolete. We are the most traditional ‘ship’ in the North Dakota University System fleet and our vessel has become unfit for the kind of voyages we need to make. Potential students are visiting our campus and choosing not to attend simply because things are so run down. Our vessel is taking on a great deal of water after 40 years of neglect, and now it needs twice the maintenance of any other ‘ship’ in the NDUS fleet.

“As you all know too well, this university is facing serious challenges. But, it is our resolve to rebuild our vessel, train our crew, and set out in search of new lands. Only time will tell us how well we did.”

The University and MSU Foundation have recovered from huge financial deficits. A strategic plan is guiding the university in decision-making. Enrollment has steadily grown, from 832 in 2006 to 1,130 in the fall of 2016. The MSU Foundation had its biggest year in 2016-2017, raising nearly $2.9 million, and the endowment has grown from $2 million in 2010-11 to $5.9 million in 2015-16. Employee satisfaction was at 87% in 2012-2013, the highest in the North Dakota University System, growing from last in the system just five years previously. Academic methodology and delivery systems have evolved. An addition to the Science Building and library has become the home to the Division of Education and Psychology and the library and Science Building have been updated. It had been 40 years since the state had provided for a building project at MSU. The largest residence hall, Agassiz Hall, has been completely renovated to provide suite- and apartment-style living accommodations for students. A coal-fueled heating plant, which became operational late in 2009, is saving the campus hundreds of thousands of dollars in heating costs. The state provided funding for a campus-wide drainage project and new facilities for the Health, Physical Education, and Recreation department. New thrusts in nursing, STEM, the Master of Arts in Teaching program, distance delivery, research, and other innovations are going well. Mayville State is collaborating with a number of entities to increase efficiencies. While operating budgets will be leaner the 2017-2019 biennium, Mayville State came through the largest budget reduction in its history this past year.

Dr. Hagen closed his address by announcing his decision to retire at the end of July in 2018, stating that prosperity for the university seems eminent for the foreseeable future and that it is strategically the right time to let someone else take the helm.

In his remarks, Hagen said, “I am beginning my 12th year as president of Mayville State University. The time has gone so fast, yet somehow I have become either the third- or fourth-longest serving president in the history of the campus. In that time, we have gone from serious collapse and crises, to recovery, to many years of prosperity, and we have now just avoided what could have been another very difficult time. It has been an unbelievable journey.”

Hagen began his employment at Mayville State in 1976 as a faculty member in the Division of Business. He has served in several roles during his tenure, including Business Division Chairman, Chief Information Officer, and Vice President for Academic Affairs.

“I can’t imagine not getting up in the morning and heading for Old Main,” stated Dr. Hagen, “but I have been richly blessed with good employment, challenges galore, excellent employees, colleagues, and friends, and a wonderful group of students to serve each year. Thank you all for your support and for your hard work and determination to move this campus forward and for helping to create such a sleek, efficient, and functional ship. Please know that I could not be prouder of all of you, and that I have thoroughly enjoyed working with you.

“I wish everyone a great year as we sail together on our last adventure.”