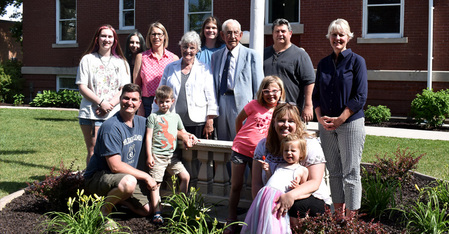 An occasion to recognize special people and places, the grand opening and dedication of The Lyng Garden of Comet Pride and The Garden of Personal Service on the grounds of the Edson and Margaret Larson Alumni and Leadership Center was held on the afternoon of Saturday, June 26. Gorgeous weather and a lovely garden backdrop set the stage for a wonderful time of celebration for all in attendance.

What had previously been known as the “Flagpole Garden” officially became “The Lyng Garden of Comet Pride,” with remarks made by MSU Alumni Association board member and volunteer Doug Anderson, and responses from the garden’s namesake, Dr. Merwin and Myrna Lyng.

The Lyngs have been instrumental in making The Lyng Garden of Comet Pride and The Garden of Personal Service possible. They were involved with salvaging architectural elements and other items from East Hall, West Hall, and the Old Gymnasium when the historic buildings were razed several years ago. Their work and enthusiasm for the university and its history led to the desire to memorialize the historic buildings that are near and dear to the hearts of many Mayville State alumni.

Other highlights of the June 26 program included remarks from volunteer Lute Simley, who prompted audience participation as he pointed out highlights of how each of the gardens came together with much credit due to the willingness of numerous volunteers who jumped to task in a moment’s notice. “Alright! Alright! Alright!” became the mantra of Simley’s remarks.

The spirit behind the establishment of The Lyng Garden of Comet Pride and The Garden of Personal Service is to honor those who have served in significant roles at Mayville State and who have been positive forces in the history of the beloved institution. These are places where those who have been a part of Mayville State’s history can reflect on their memories. These are also places where future generations can learn about the treasured history that has endeared Mayville State University to so many.

Photo caption: Members of the Merwin and Myrna Lyng family who attended the June 26 grand opening and dedication event included their children, Karen, Kathy, and John, as well as most of the couple’s grandchildren.