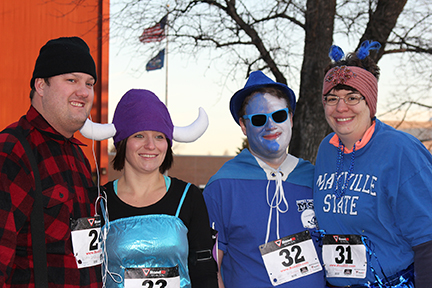 The Saturday, Nov. 1 Farmers Bowl festivities marked the end of a year-long celebration of Mayville State University’s 125th anniversary, which officially took place the following day, on Nov. 2, 2014. Sponsored for the third-straight year by Agassiz Drain Tile of Buxton, N.D., Farmers Bowl honors the area’s agricultural way of life. The MSU Foundation, Comet Athletic Club, and Alumni Association, together with alumni and friends of the Mayville-Portland community and beyond, join together each year to celebrate Farmers Bowl. This year marked the 20th annual Farmers Bowl, and activities included a tag team race, a tailgate picnic hosted by the Comet Athletic Club, the Titan Machinery Farmers Bowl football game featuring the MSU Comets vs. Valley City State, and the Farmers Bowl Auction. Lois Karlstad and Cheryl Angen, both of Mayville, were this year’s co-chairs for the festivities.

The 18th annual Farmers Bowl Auction wrapped up the day’s activities in the MSU Campus Center Luckasen Room. Silent and live auction bidders enjoyed great food and spirited bidding on a fantastic assortment of donated items in the annual auction. When all was said and done, the auction and other Farmers Bowl activities generated nearly $60,000. Proceeds will be distributed through the MSU Foundation, the Alumni Association, and the Comet Athletic Club for the benefit of Mayville State University and its students. 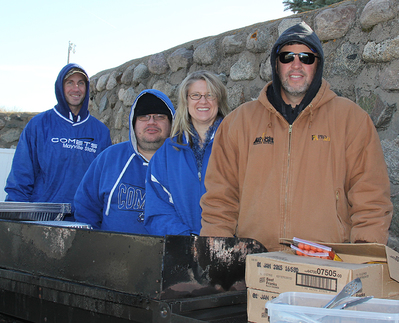 “We are overwhelmed by the generosity of our wonderful alumni and friends who are making a tremendous difference at Mayville State University through their participation in the wildly successful reverse auction,” said MSU Director of Development John J. Klocke. “The 50% match provided by the state of North Dakota will allow our donors’ generosity to have an even greater impact. The ability to offer scholarships is instrumental in the recruitment of students. These scholarships will help to make the ‘Mayville State experience’ possible for more students.”

The Farmers Bowl festival started out with something new this year, a tag team race. The event was coordinated by Mayville State enrollment services representative and Mayville State graduate Rick Karboviak. People were encouraged to dress up, run, and have fun in the run where each member of a two-person team made a one-mile trek around the Mayville State campus. With a time of 15:31, teammates Jeff Jacobson and Rick Karboviak won the male division. In the female division, first place went to Cailee and Jeni Peterson (15:35), second place to Leah Larson and Jen Kohls, and third place to Deb and Joelle Ertl. Cailee Peterson and Jake Nepstad took first place in the co-ed division, with a time of 12:36. Leah Larson and Rick Karboviak took second, while Dena and Jerrod Bergstrom and Dustin and Sarah Olson took third and fourth place, respectively. Dustin and Sarah were named winners of the “Craziest Comets” contestThose who braved the cold and windy weather enjoyed a great tailgate picnic of hot dogs, beans, and chips, hosted by the Comet Athletic Club outside of Jerome Berg Field prior to the Farmers Bowl football game. The Comets fell to Valley City State in the game, which was sponsored by Titan Machinery.

“Farmers Bowl is the product of many great volunteers working together for the good of Mayville-Portland and Mayville State University. We are very grateful for all who get involved with Farmers Bowl,” said Mayville State President Gary Hagen. “From the people who do the physical work, to those who attend and participate in the events, to those who donate items for the auction, and those who attend the auction and make purchases, Farmers Bowl is a great team effort. We appreciate all that is done to make Farmers Bowl a success year after year. I add a special note of thanks to Agassiz Drain Tile and partners Ross Johnson, Derek Peterson, and Neal Johnson, who sponsored Farmers Bowl for the third year. Because of their generosity, Mayville State and its students will experience even greater benefits as a result of the annual Farmers Bowl activities.” 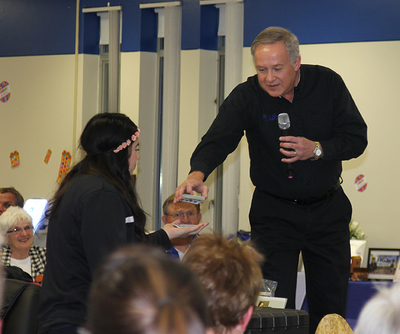 Top: People were encouraged to dress up, run, and have fun in the first-ever Farmers Bowl tag team race held the morning of Nov. 1, and that is exactly what these folks did. Pictured from left to right are Jerrod and Dena Bergstrom, aka Paul Bunyan and Babe the Blue Ox, and Dustin and Sarah Olson, who were dressed as crazy Comets. 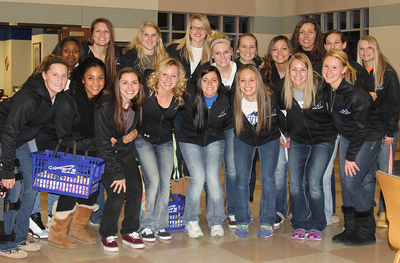 Fourth: Magician and MSU Vice President for Academic Affairs Keith Stenehjem provided a sample of the amazing magic tricks he will provide as entertainment for a magical children’s birthday party that was sold in the annual Farmers Bowl Auction. The members of the audience waited eagerly to see if Keith could indeed keep track of which card his assistant, MSU Women’s softball player Tiffany Soria, was holding in her hand.

Bottom: Members of the Mayville State University women’s basketball team assisted at the auction by selling birthday party treat bags and gift boxes to those in attendance. In the raffle event, those who purchased bags or boxes had a chance to win prizes.