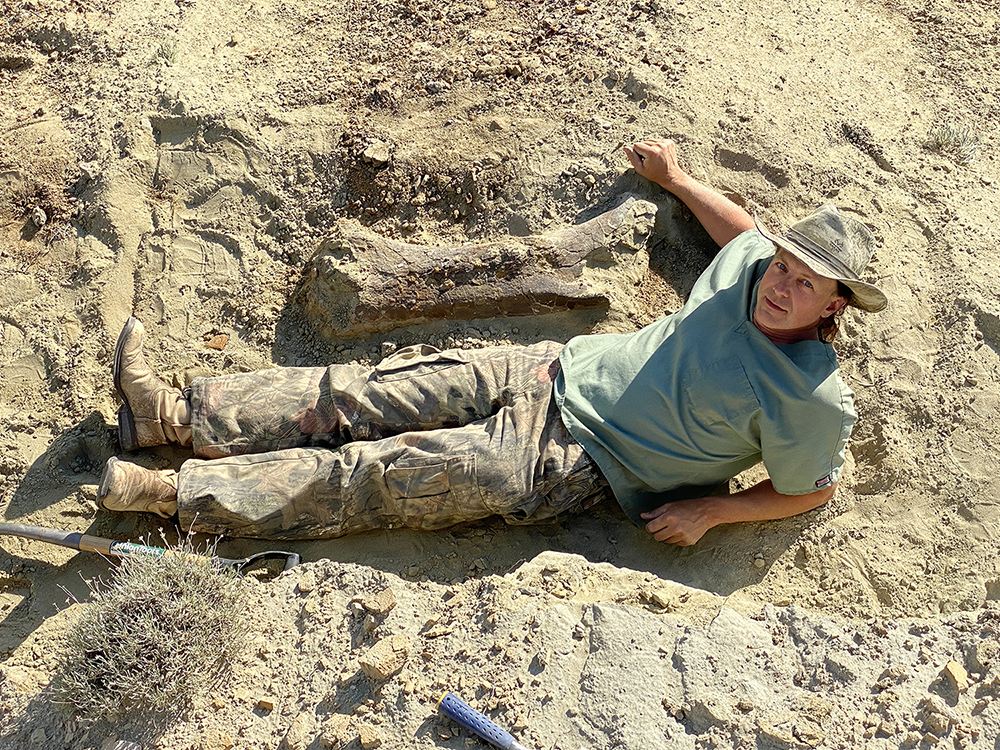 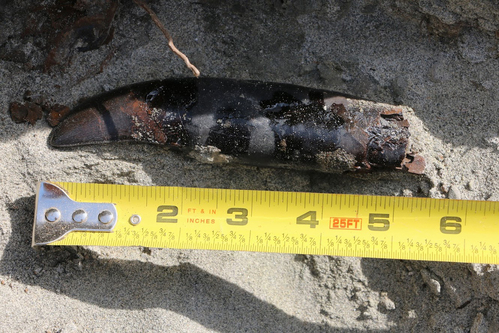 Dr. Michael Kjelland, Assistant Professor of Biology at Mayville State University and president of Fossil Excavators, a non-profit organization that is devoted to cross-disciplinary research collaborations and opportunities with a focus on Paleontology, Paleoecology, Paleobiology, Paleobotany, Paleopalynology, Molecular Paleontology, and even Archaeology, made several rare and significant finds in the Bowman, N.D. area during the summer of 2021. The focus of Fossil Excavators isn’t just the discovery, preservation, collection, preparation, and curation of fossils, but it also includes hands-on education about fossils, the environment, and conservation issues.

Among the finds were the remains of an adult Tyrannosaurus rex and a juvenile T. rex, a Nanotyrannus jaw, and more than a dozen species, including Triceratops, Bowfin (a fish, Amia), Gar (a fish), Borealosuchus (crocodile), Brachychampsa (alligator), and more than two species of turtles. In addition, a femur that is believed to have come from an Anzu wyliei, a prehistoric creature that scientists refer to as “Hell’s Chicken” because of its size, was unearthed. The bird-like creature may have weighed more than 400 pounds. The femur found by Kjelland is about twice the size of any Anzus femurs discovered previously.

“This means that the bones are from the largest Anzu ever discovered in North America, and possibly even a new species of Oviraptorid,” Kjelland says.

These discoveries were made in the same area where Kjelland earlier discovered a Triceratops skull, now known as Skull X, which became the topic of a Wall Street Journal documentary that explored the roles of for-profit companies, universities, governments, and non-profit companies in the commercial fossil trade. Link: https://www.youtube.com/watch?v=H7WcRTPMcKo.

Dinosaur expert Peter Larson, president of the Black Hills Institute for Geological Research in Hill City, S.D., a private corporation specializing in the excavation and preparation of fossils, as well as the sale of original museum-quality fossil material replicas, said Kjelland’s discoveries are coming from a bone bed that was formed millions of years ago when rivers and streams washed debris downstream until water flow slowed due to something like a bend in the river. This collection is coming from an ancient creek channel.

Many of the discoveries of Kjelland and his fellow fossil hunters come from the Cretaceous geological period, about 66 million years ago, when an asteroid is believed to have struck the earth, prompting the widespread extinction of the dinosaurs.

Dr. Kjelland says that only a small number of juvenile T. Rex partial skulls have ever been found. In addition, a partial skull believed to be from Nanotyrannus lancensis, which some experts say is a dwarf relative of T. rex, although a different species (and a topic of much debate), were also found at the site near Bowman last summer.

“Either way, as far as we know, no other partial skull from a juvenile T. rex of Nanotyrannus lancensis has ever been found in North Dakota before,” said Kjelland.

Kjelland feels his discovery of a possible Nanotyrannus jaw could help to make a case for a species separate from T. rex. He also says a planned CT scan of the jaw will hopefully detect teeth in the maxilla that have not yet erupted. The rare Nanotyrannus fossil, something the likes of which has never been found in North Dakota until now, has been named “Beautiful Nightmare.”

Kjelland’s nonprofit, Fossil Excavators, has produced several YouTube and TikTok videos about the fossil find, and news of his recent discoveries have been picked up by the Associated Press and were recently featured in The Grand Forks Herald, The Bismarck Tribune, Weather Channel, and U.S. News and World Report. See more at www.fossilexcavators.com.

Dr. Michael Kjelland was part of a team that unearthed a partial 65 million-year-old Triceratops skull named Alice in the Badlands of southwestern North Dakota, in the same general location of his current finds, in the summer of 2019.  Kjelland had been doing digs in the Hell Creek Formation, an area rich in fossils spanning Montana, North Dakota, South Dakota, and Wyoming, off and on for many years. See more at www.youtube.com/channel/UCePCANNxmwVV3l5IsLL9V0w or www.tiktok.com/@duranosaur?lang=en.

Top: To give a sense of size of the fossil, Dr. Michael Kjelland poses next to a Triceratops femur unearthed during an excavation near Bowman, N.D. during the summer of 2021.