Mayville State University students, faculty, and staff have achieved their goal of securing 200 backpacks that will be sent to school children in Nepal. Their project, coordinated by Dr. Brittany Hagen, assistant professor of education, began in April of 2016. The fund-raising project was pursued in support of the goals and dreams of Ann Nicole Nelson, Stanley, N.D. native, who perished in the September 11, 2001 terrorist attacks on the World Trade Center in New York City. 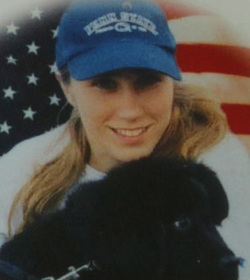 Who was Ann Nicole Nelson?

Ann Nicole Nelson was known as a positive, purposeful, and adventuresome person. She was a bond broker for the Cantor Fitzgerald Company. Sadly, at 30 years old, Ann perished in the World Trade Towers, where her office was located. This happened just four days after she started working there.

When her computer was returned to her parents after her death, a precious discovery was made. Among the documents on Ann’s computer was a file entitled “Top 100.” The list was a compilation of goals and dreams Ann wanted to accomplish and experience in her lifetime. The list included being healthier, building a house in North Dakota, and going helicopter skiing with her dad. The list was incomplete with only 37 items. The list and story were published in the New York Times and Cosmopolitan magazine.

A house in North Dakota

Seeing the story inspired Jeff Parness, founder of New York Says Thank You (NYSTY), to contact the Nelson family to explore the possibility of a project. Out of those discussions grew a plan to build a year-around adaptive recreation facility for wounded veterans and people with disabilities. Annie’s House, a collaborative effort by NYSTY, Bottineau (N.D.) Winter Park, and friends and family from across the country, brought Ann’s dream to build a home in North Dakota to life.

Item #6 on Ann’s list was “Nepal.” On the anniversary of 9/11 in 2015, volunteers with NSYTY travelled to Nepal to help rebuild schools destroyed in a deadly earthquake and lift the spirits of children in Katmandu as part of their emotional recovery from the tragedy. Stars of HOPE were painted and funds were raised. An early childhood development center was built in Ann’s memory. It is located in Singulpuchek, Nepal, one of the areas hit hardest in the earthquake. 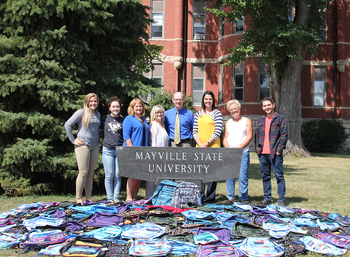 What does this have to do with the backpack project?

Deepa Tamang, a teacher in the Alchemist Academy in Katmandu, was so moved by this international gesture to “pay it forward” on the 9/11 anniversary, and so inspired by Ann’s story, that she decided to “pay it forward” as well. Deepa has been helping the remote village in the Sinulpuchek region by bringing clothes and books for the young children. It is her way to keep this chain of love and kindness going.

Deepa asked for 200 weather-proof backpacks that she can give to the children to use to carry their books to and from school. The children have to climb very steep hills to get to school and backpacks could make their lives easier and make a very big statement – that we care.

The folks at Mayville State learned of this opportunity to help through Dr. Mary Stammen, director of the GST Special Education Unit located in Portland, N.D. Dr. Stammen and Ann were friends, and Dr. Stammen is very familiar with the acts of kindness that are being performed in memory of her friend, Ann.

“The members of the Mayville State family have a warm place in their hearts for school children, as the university’s original mission of educating school teachers is still going strong today,” said Dr. Brittany Hagen. “The backpack project was a perfect fit.”

The project moved right along with monetary donations from near and far, and included some significant donations from the May-Port CG Public School FBLA, Mayville United Ministry, a ladies aid group from New Town, N.D., and Teresa Delorme from Belcourt, N.D.

Now that the funds have been raised, 200 colorful backpacks have been purchased, with the help of Pam Soholt, director of the MSU Bookstore, and the generosity of Jansport of Appleton, Wis., the maker of the backpacks. Dr. Stammen will be packing up the backpacks and sending them off to Nepal, but not before an extra measure of kindness is added by the folks at Mayville State.

Donalee Strand, coordinator of the Mayville State Education and Innovation Center, is working on a project whereby a personal notes written by area students will be inserted into each of the backpacks. The hope is to encourage pen pals and some communication among school children in Nepal and North Dakota, reinforcing the overall message of love and kindness among all people of the world.

“Mayville State University has long been known for the personal service that is provided, not only on campus, but also in the community, across the country, and around the world,” said Dr. Gary Hagen, MSU president. “This personal service has shone brightly, as the backpack project has personified what made Ann so special - loving people deeply, embracing diversity, and learning about and traveling the world.”

Bottom: Pictured from left to right are several of the folks who were involved in raising funds for the Backpacks for Nepal project: Jada Nygaard and Shelby Sedivec, May-Port CG High School students who helped with fundraising; Pam Soholt; Donalee Strand; Mike Moore, representing Mayville United Ministry, a major financial contributor to the project; Brittany Hagen; Mary Stammen; and Anthony Stockfish, Mayville State student who assisted with promotion of the project. The colorful backpacks that will be sent to children in Nepal can be seen in the foreground.