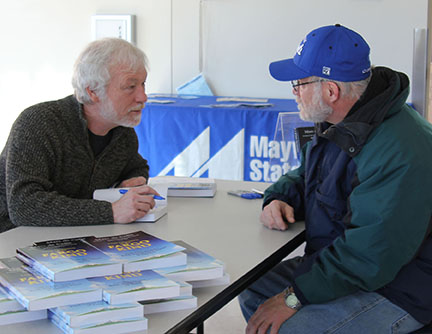 How Fargo of You grew out of de Celle’s experiences after moving here from Arizona eight years ago. When de Celle and his family settled just outside of Fargo in the summer of 2005, “strange things started to happen, things we never imagined possible, things that left us speechless… until we found just the right thing to say: ‘How Fargo of You,’” de Celle explains.  It was these incidents of “anonymous kindness” that prompted de Celle to write both of the books.

De Celle first learned about Mayville State University when he met Mayville State associate professor of English, Dr. Carolyn Baker, at a book signing event in Fargo. Dr. Baker suggested that de Celle might be interested in the stories of her students who came to Mayville from around the country, and around the world, for his next book.

De Celle took the opportunity to collaborate with Baker and her students who were enrolled in Intercultural Communication and English Essentials, and he first met with the members of the class at Mayville State in January of 2012. Over the next several months, students researched and wrote stories for consideration by de Celle. De Celle returned to campus in May of 2012 and met with the students, who each had a written copy of his or her story and also gave an oral report of the anonymous kindness they’d experienced and chosen to write about. According to de Celle, this was a life-changing experience.

Marc de Celle didn’t include every story he heard from Mayville State students in Close Encounters of the Fargo Kind, which came out in November of 2013. Some students asked that their stories not be published, lest people “back home” get upset with them for talking about how much nicer people are in North Dakota, while a few other stories were identical, in which case de Celle chose one to include.

In appreciation for his experiences with Mayville State students, de Celle will donate a portion of the profits from each book sold to Mayville State University. You can see excerpts from Close Encounters of the Fargo Kind at howfargo.com.