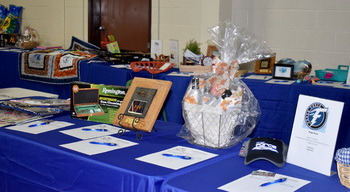 To add to the festivities, the Farmers Bowl silent auction offered about 70 items on which those who attended the event could bid. The auction had something for everyone and bidders had a great time as they worked to win the items of their choice. 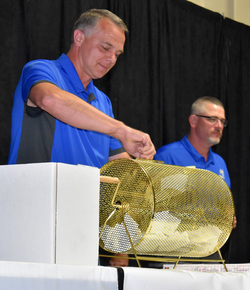 “We thank the many Mayville State supporters who donated items and those who purchased them,” said MSU Foundation Interim Executive Director Beth Swenson. “The Farmers Bowl silent auction and Sportsmen’s Raffle event provided a grand finale to Farmers Bowl 2019.” 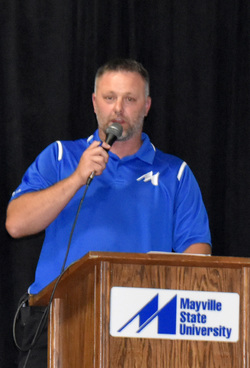 Another highlight of the evening was the drawing for 50 guns that were given away to individuals who had purchased raffle tickets for a chance to win. Ticket sales are limited to 500, so participants have a 1-in-10 chance of winning. The event was attended by about 325 people who enjoyed dinner and had an opportunity to participate in a variety of other raffles with the chance of winning some terrific prizes, as well as bid in the silent auction. Proceeds of the Sportsmen’s Raffle activities will be used to support academic scholarships for Mayville State student athletes.

“I am so very appreciative of the work that was done to plan and execute the 13th annual Sportsmen’s Raffle event, including the Farmers Bowl silent auction,” said Mayville State University President Dr. Brian Van Horn. “Those who attended the event appeared to have a great time, all for such a noble cause. Thank you to all!”

There were numerous winners of side raffle prizes, including Jeff Eliason, who won a gun safe donated by Valley Plains Equipment. Ted Karlstad was the winner of a Ruger .357 revolver housed in a special Mayville State case hand-crafted by Harlan Johnson of Mayville.

“We are grateful to the many people who purchased raffle tickets and participated in the event activities on Sept. 14,” said Mike Carr. “We also express our sincere thanks to our emcee for the evening; to Valley Plains Equipment, Thrivent Financial, Sue Strand and Jeremy Strand, Miller’s Fresh Foods, Scheels, and Floyd’s for their support; and to the Comet Athletic Club board members who worked hard to make it happen.”

Top: Mayville State University supporters were very generous in their donations to the Farmers Bowl silent auction. About 70 items were donated and available for sale.