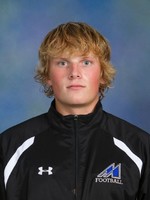 We lost a special member of the Mayville State University family this week. Matthew Holland, 19, a Mayville State student and tight end on the MSU Comets football team, died Saturday, Jan. 17 of complications from a seizure. Matt was a freshman from Barnesville, Minn.

MSU students, faculty, and staff honored and celebrated his life at a memorial service held in the MSU Classroom Building Auditorium Tuesday afternoon, Jan. 19. We are grateful to Pastor Lloyd Arnegard from Riverside Evangelical Free Church in Mayville and Pastor Nathan Strong from Bruflat Lutheran Church in Portland for their assistance, not only with the service, but also in counseling students who are dealing with the loss of a friend. We are also grateful to Mayville State student Shaleen Helmer and MSU faculty members Mike Bakken and Greta Paschke for sharing their wonderful musical talents with all who attended. Music is a very important element in a service such as this.

Comets head football coach John Haines gave remarks from the podium. He told of his first encounter with Matt. It was when the 130 members of the football team were checking in for pre-season camp in August. You may recall that Coach Haines had only been on campus two or three days when camp started last fall. Checking in 130 football players in itself is frenzied, but the fact that Coach Haines was so new to campus himself had to make it pretty stressful for him.

He said he spotted happy-go-lucky Holland in the fieldhouse lobby and struck up a conversation with him, hoping it would help to ease his own nerves. Name recollection not being his strong suit, Haines said he asked the young man’s name a couple of times. “It’s Matt, Coach,” Holland replied over and again. In his effort to be able to call him by a name he was sure to remember, Coach Haines said, “With your blonde hair and blue eyes, you look like a fine Norwegian young man. Do you mind if I call you ‘Thor?’” This nickname stuck, and as we learned later, Matt considered it to be pretty special.

During a time of student reflection, a student who had been in the same public speaking class with Matt this fall told about the speech Matt gave. In introducing himself to the class, Matt let everyone know that he liked to be called “Thor,” because that was the name Coach Haines had given him. To underscore that sentiment, Matt wore a T-shirt with the name “Thor” imprinted on it to class that day.

It was wonderful to hear all of the great comments and stories our students shared regarding “Thor.” His roommate told about his thoughtfulness and generosity. It was Matt’s 19th birthday just last week. His parents came and took him out for dinner that evening, and when they returned, Matt came bearing gifts for his roommates, candy bars and soft drinks. They were in awe of the fact that it was Matt’s birthday, but he brought them gifts.

Matt was described as a prankster, a competitor, a friendly dude, a professional wrestling and Batman fan, someone with a very positive demeanor, and a friend who was “always there for you.” When others were down, he did his best to cheer them up.

I was so proud of and impressed with our students who gave their remarks. They made some very thoughtful comments, and several had spent time looking for just the right words to describe Matt, through the words of songs and the quotations of others. One student read a poem he had written.

Matt’s bright smile came up over and over again during the time of sharing. One student likened Matt’s smile to sunshine. He said seeing that smile was like getting a nice hug, a heartfelt “good morning,” or a handshake. “It made you feel like he was your friend.” The student summed his remarks up by saying, “We know where (Matt’s) soul is. Anybody with a smile like that has to go to heaven. He’s looking over us.”

It is truly a blessing to be a part of the Mayville State family. I extend my personal thanks to our faculty and staff who have been and continue to help all of us work through this very difficult time.