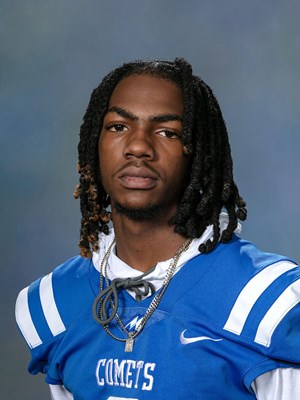 Joshua Tetteh, a Mayville State University freshman from Orlando, Fla., is scheduled to appear on the ABC Good Morning America program Thursday morning, Sept. 29, somewhere between 7 and 9 a.m. ET. Tettah is a defensive back on the Comets football team and a graduate of Evans High School.

At the end of Joshua’s junior year in high school, Joshua underwent an athletic physical screening that included an ECG. The results of the ECG came back as abnormal and it was determined that Joshua needed a cardiac ablation, a procedure that scars tissue in the heart to block irregular electrical signals.

The ECG Joshua received was provided through the work of Who We Play For (WWPF), a non-profit organization that operates under the mission of eliminating preventable sudden cardiac death in youth through affordable heart screenings. WWPF represents every young person who lost their life to sudden cardiac arrest. The organization fights to ensure that families, teams, and communities will never know that pain.

The story of Rafe Mccarone, a student at Cocoa Beach High School, inspired the founding of WWPF. Rafe went into sudden cardiac arrest following a warm-up routine before the beginning of soccer practice in November of 2007. His community was rocked by the reality that a seemingly healthy and active 15-year-old who passed all his sports physicals could die from heart disease while playing the sport he loved most. It was later determined that Rafe’s heart condition was very detectible, and his death could likely have been prevented with proper screening. To help prevent the possibility of sudden cardiac arrest in other student athletes, WWPF was established in 2014. WWPF began partnering with schools across the state of Florida and six other states to provide affordable ECG screenings for students.

Joshua Tetteh was fortunate to be one of the high school student athletes who was helped through the work of WWPF. Following the cardiac ablation procedure, Joshua missed practices and conditioning during the summer before his senior year, but with a healthy heart, he was able to complete his senior season of football and graduate from high school in the spring of 2022.

According to their website, WWPF has screened over 100,000 people in over 300 communities across seven states. Seventy-six individuals have needed some level of medical intervention, including heart transplants, and abnormalities that can now be monitored were discovered in hundreds of others.