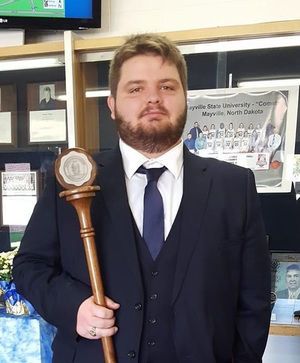 Michael Moen, Mayville State University senior and Student Senate president, has been honored with the North Dakota Student Association (NDSA) Legacy Award. The award is presented to a graduating senior in recognition of the individual’s lasting impact on the NDSA, both through representation of their home university, and also for the work with other universities and the NDSA officer team. The NDSA general assembly chooses the recipient via a vote.

The NDSA represents the voice of North Dakota's 45,000 public college and university students. As an authority on student welfare in the state of North Dakota, NDSA advocates on issues of higher education in support of enhancing the student experience.

Moen has been attending NDSA meetings since he joined Mayville State’s Student Senate in the fall of 2015. He has helped provide feedback and thoughts in discussions, ranging from international student health to changes to Campus Connection, the North Dakota University System (NDUS) student information system where students manage their accounts, financial aid, and registration processes.

Michael has held the office of Director of Student Involvement for NDSA. Holding this position gave him the opportunity to sit in on NDUS meetings and give feedback voicing the view of a student. During the past three years, Moen has acted as Mayville State University’s head delegate to NDSA. In this role, he is the Mayville State person of contact for NDSA members.

Reflecting on his work in student government and NDSA, Moen said, “My experiences with Mayville State’s Student Senate and the NDSA have prepared me for life in many ways. I have learned much about many different types of people. I’ve also learned that it’s important to keep others in mind, as your actions will affect them.” He says the most important thing he’s learned is to accept that he might not always know the best way to do things.

Michael Moen plans to graduate from Mayville State University this spring with a bachelor’s degree in social science and a minor in sociology. His hometown is Ada, Minn.