For the second summer in a row, Mayville State University’s football coaches put on a football camp in Fairbanks, Alaska. From June 12 through 14 about 100 football players from Carl Ben Eielson, West Valley, North Pole, and Houston high schools participated in the camp. They were instructed by Mayville State coaches John Haines, David Pena, Billy Tomblin, Anton Anderson, Denver Price, Weston McGill, and James Morowski. Among the topics covered were the fundamentals of playing football and how to be recruited to play college ball.

Jim Morowski, Mayville State University Director of Enrollment Services and an assistant with the Mayville State football team, graduated from Carl Ben Eielson High School in Fairbanks, Alaska, before he was recruited to become a student and football player at Mayville State in the mid-1990s. While at MSU, he met his future wife, and after graduating, the couple chose to remain in the Mayville-Portland area to raise their family. Jim’s parents even chose to join them and moved to Portland, N.D. several years ago. “And the rest,” as they say, “is history.”

It is interesting to note that not only Jim, but also several other Mayville State students and alumni, graduated from Carl Ben Eielson High School in Fairbanks. The hometown of the school’s namesake is just a few miles down the road from Mayville State University, in Hatton, N.D. An aviator, bush pilot, and explorer, Eielson delivered mail in Alaska and was killed there in an airplane crash in 1929. He is buried in the cemetery located along Highway 18, about 15 miles north and west of Mayville. 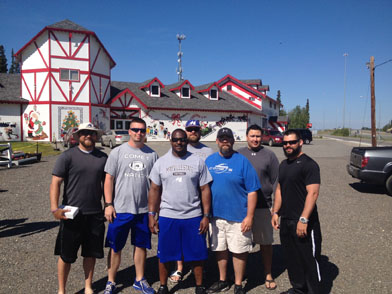 A bonus to visiting Alaska for the Mayville State coaches was the Santa Claus connection. While there, Morowski and the others made a trip to the North Pole and stopped at Santa’s house. As a recruiter of students, Jim knows the importance of making lists … and even checking them twice. In this age of high-tech communication, Morowski is often contacted by companies who wish to sell him names of prospective students to contact, but he decided to try a simpler and less expensive way. Since he was in the area anyway, Morowski stopped by Santa’s house to see if he could get a few pointers from the master of lists, Santa himself. As he said, “When checking out Santa’s list, it’s pretty easy to tell who is naughty and nice!”

The Mayville State contingent is grateful to the host schools of West Valley and Eielson for the hospitality they were shown while in Alaska. Parents, booster clubs, and coaches went way of out their way to make the trip fun and exciting for the Comets staff. They are hoping to make the camp an annual event.