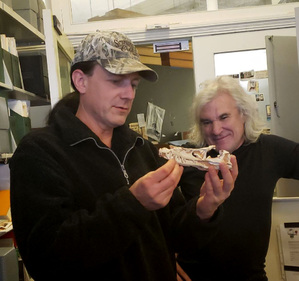 Dr. Michael Kjelland, Assistant Professor of Biology at Mayville State University, was recently featured in a Wall Street Journal story that focused on the clash between science and commerce over selling dinosaur fossils. People are buying rare fossils for millions of dollars. Paleontologists fear that if the wealthy continue to buy up the fossils, they will be lost to science because public institutions cannot afford to buy them.

Kjelland has been in the spotlight of several local, regional, national, and international media outlets over the past several months. He was part of a team that unearthed a partial 65 million-year-old Triceratops skull in the Hell Creek formation of the Badlands of western North Dakota last year. Kjelland is an experienced excavator who found another Triceratops skull in that same area in 2018.

Kjelland, who is president of a nonprofit company called Fossil Excavators, LLC, knows that he may only break even on some digs, but that’s okay with him. He says he’s in it for the love of science and adventure, and not only for the money.

Photo caption: Dr. Michael Kjelland (left) studies a velociraptor skull together with Dr. Mark Norell, at the American Museum of Natural History in New York City. Norell found the skull in the Gobi Desert. He is a Macaulay Curator and Chairman of the Division of Paleontology at the museum.