Artwork of George Dammen on permanent display in Larson Center 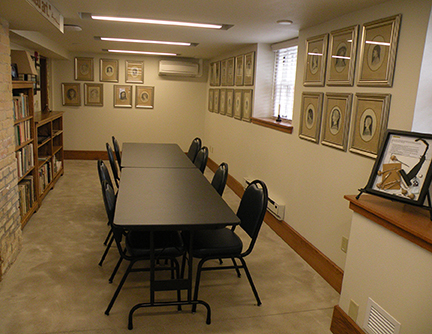 George Dammen was a man of many interests and talents that stretched from Mayville and beyond. His achievements earned him recognition as an artist, teacher, farmer, family man, and one of the best trapshooters in North Dakota.

During an interview conducted in 2002, when his artwork was exhibited in the Northern Lights Art Gallery at Mayville State, George said, “I have always liked art.”

George’s art legacy lives on at Mayville State University, a place that George loved, in the Edson and Margaret Larson Alumni and Leadership Center, where his pencil-drawn portraits and linoleum prints are on permanent display. The George Dammen Gallery and Activity Room is located in the lower level of the building. A collection of George’s drawings, prints, and photos from the 1930s was a gift from Dammen’s daughter and her husband, Allison and Bud Gentle of San Antonio, Texas, who also sponsored the renovation of the room. Nannette Bagstad of Mayville funded the framing of the artwork.

George’s pencil portraits, created in 1931 and 1932, are very distinct.  The work shows George’s knowledge of the structure of the head and facial features, especially focusing on the eyes. Each portrait, either of a family member or a friend, are set off by dark shades of the background contrasted with lighter tones of the face. More interesting, the work takes the viewer back in time, showing hairstyles and clothing of the early 1930s, recording historical aspects of the time period. 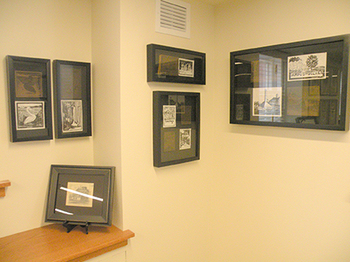 Linoleum block printing is another major component of the permanent Dammen exhibit. Linoleum prints are created by carving and removing parts of the linoleum surface, placing ink over the surface, and printing the design. George’s block prints showed a variety of themes, including animals, rural Mayville, and the Mayville State campus. George carved each block with much detail, contrast, texture, and depth.

His “Enter To Learn, Go Forth To Serve” block shows an early view of the entrance of Old Main, which is covered with ivy. This print was displayed on the printed program of the seventh annual Mothers College Day on November 14, 1932.

George designed the covers of many college newsletters and programs. His artwork remained in the public eye as he painted signs on buildings including the Goose River Valley Flour Mill, Skatberg’s, Dikel’s Department Store, Mayville Grain, and other businesses. George also created Christmas cards that he sold for 50 cents a dozen.

In addition to being an artist, George won many titles for his accomplishments in trapshooting.  He became one of North Dakota’s top trapshooters, and in 1981, he was inducted into the North Dakota Trapshooting “Hall of Fame,” the highest honor that can be achieved by a trapshooter in North Dakota. This was an amazing accomplishment, considering that George had lost the sight in his right eye in a farming accident in 1955. After the accident, he designed a special attachment for his shotgun that would provide for accurate shooting using his left eye.

George was also a farmer. In 1948, he seeded every tillable acre he had into flax. No one in the area had grown flax previously. The yield was tremendous that year, resulting in George being able to pay off his farm loan.

George was born in rural Blanchard, N.D. and earned a two-year degree, and then a bachelor’s degree from Mayville State in 1934. He studied art and social studies. In 1933, he married Gertrude Vogt, and they became the parents of one daughter, Allison.

George taught school for six years in western North Dakota before he returned to the Mayville area to farm. In his later years, George resided at the Luther Memorial Home in Mayville, where he loved to visit with people. George passed away on April 30, 2005.

“We are very proud to have George’s artwork beautifully displayed in the historic Edson and Margaret Larson Alumni and Leadership Center,” said Doug Anderson, MSU alumni volunteer who was instrumental in the renovation of the building. “We thank Allison and Bud for their generous and thoughtful gift to Mayville State University.”

The Dammen exhibit may be viewed during regular office hours at the Larson Center. Call 701-788-4750 for more information.

Top: Twenty-five pencil-drawn portraits by George Dammen are on permanent display in the George Dammen Gallery and Activity Room located in the lower level of the Edson and Margaret Larson Alumni and Leadership Center at Mayville State University.

Bottom: George Dammen created linoleum prints, some of which are creatively displayed in the George Dammen Gallery and Activity Room. Shadowboxes contain the carved linoleum pieces along with the ink prints that were made with them.