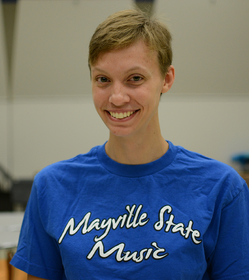 At the beginning of the fall semester, I was interviewed for the music department with Dr. Hunter. During the interview I was asked about what brought me to Mayville State University. I answered honestly by saying volleyball. This response must have taken the interviewers by surprise because one responded with, “You’re in volleyball, too!?” I said "yes, and I’m in the musical, the band, the multicultural club, and I went on the CORE Trip this past March."

For the rest of the interviewing process the ladies referred to me as the “Everything Student.” I laughed at this because they made it sound like I was such a unique situation, but what they didn’t realize was that I am not the only one. I have had several teammates who were in my same situation. I’ve had at least five who were also in DECA and would miss practice to go to Washington D.C. The cast of Footloose this fall is made up of a couple people from each football and basketball, along with me.

It has gotten to the point where I take these opportunities for granted. I didn’t understand why the interviewers looked so shocked, but then I thought, "Yes volleyball brought me here. Volleyball was my first passion, but what made me love it here, to enjoy every minute here? The answer to that was the opportunities."

I started out my college education at a larger college. While I was touring the campus the professors would ask me what I wanted to do. I replied with nursing, track, and choir. This made them stop in their tracks. One after the other responded with, “Well you’re going to have to choose which one.” I was shocked! For one, I am awful at making decisions, and for another, I didn’t see why I had to make such a decision. Isn’t college where I am supposed to find myself? How can I find myself if I cannot be my whole self in the process? I tried it for one semester. It broke me down. I was more lost after one semester of college than after four years of high school.

At this point, my dad gave me the best advice I have ever received. He was looking at me with pure curiosity, like he had absolutely no idea how I was going to respond. He said, “Steph, you can transfer.” To anyone else this may have been a terrifying statement. So many questions could have arisen starting with “but to where?” For me there were no questions. To me it was a wake up call to how ridiculous I was to turn down Coach Johnson’s offer to play volleyball a whole year previous. It took me less than 24 hours to decide on a new major. Within the week my dad and I had called Coach Johnson to see if she still wanted me, scheduled a campus tour, broke the news to my roommate and advisors, and I started packing. The only problem was… it was only mid-November. I still had three weeks - including finals week - before I could start my new adventure.

At Mayville State University I did not have to make choices. I could do everything I was interested in and I did. Now I have seven months to graduation. Yes, I am nervous about going out into the “real world”, but thanks to Mayville State I was able to find myself. I was able to learn about what is important to me. With this newfound knowledge I feel that I am ready for whatever happens next.

You must install Adobe Flash to view this content.