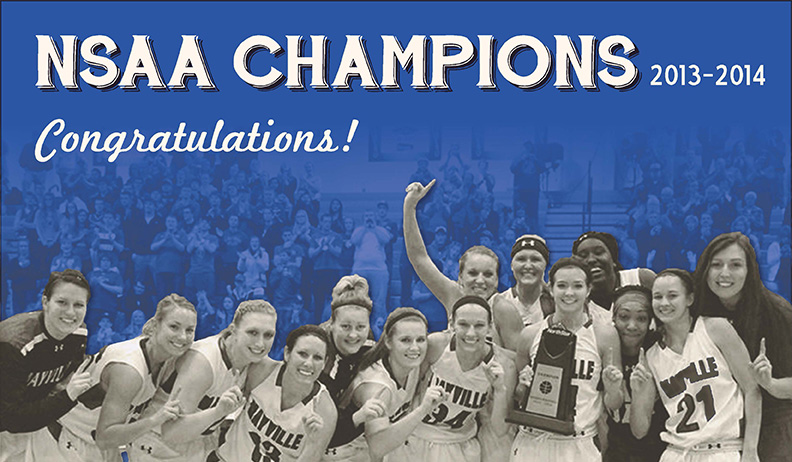 Mayville State University will participate in the 23nd Annual State Farm-NAIA Division II Women’s Basketball National Tournament scheduled for March 12-18 in Sioux City, Iowa. The Comets played in the national tournament for the first time in school history in 2013. Throughout the 2013-2014 season, the Mayville State team has been climbing in the NAIA Top 25 Coaches Poll, and currently is ranked #11. They finished the regular season with an overall record of 22-3, and completed North Star Athletic Association conference regular season play with a 7-1 record and being crowned the regular season champion. The Comets won the conference championship with a win over the University of Jamestown, a team ranked #3 in the country.

The Lady Comets will arrive in Sioux City on Monday, March 10. They’ll have team activities throughout the day on March 11 and participate in the team banquet at the Sioux City Convention Center that evening. A field of 32 teams will compete in the tournament. Games begin Wednesday, March 12 at the Tyson Events Center, with opening ceremonies scheduled for 7:00 p.m. Wednesday. The Comets will play Cornerstone University of Michigan in the first round of the tournament, Thursday, March 13. Game time is 10:15 a.m. See full tournament details at www.naia.org. 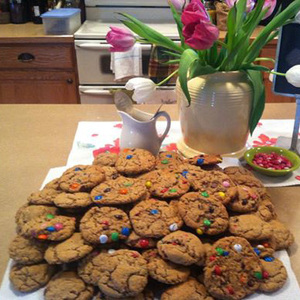 Each of the NAIA Division II Women's Basketball National Tournament teams has been invited to submit a recipe for the Sioux City Journal NAIA Recipe Challenge. Support the Mayville State University Comets by voting for M4 Cookies - Mad Malicious Mayville Monsters! Cast your vote at www.siouxcityjournal.com/recipe_challenge through Monday, March 17. The final four recipes will be selected Tuesday March 18 and prepared and tasted by a panel of judges. The overall winner will be announced Wednesday, March 19 in the Sioux City Journal's Food section. Let's make the Comets back-to-back winners in the Recipe Challenge! Last year Mayville State won the Recipe Challenge with the Comet Chocolate Chippers recipe. Share this link with your family and friends and ask them to vote for the Mad Malicious Mayville Monsters! 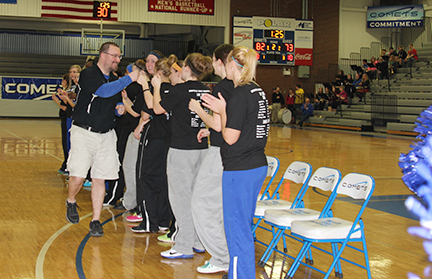 A Comets send-off celebration was held Monday, March 10 at the MSU Lewy Lee Fieldhouse. The public was invited to gather at the fieldhouse from 12:15 until 12:45 p.m. to watch the Comets' final home paractice before heading to Sioux City. A short send-off program began at 12:45 p.m. The Mayville State University band played the Comet fight song and the cheerleaders led the audience in a few cheers. The players and coaches were be formally introduced and following a rendition of "Rawhide" by MSU Director of Development John Klocke, there was a time of socializing. Klocke put new words related to the Comets' trip to the national tournament to the old familiar song. See a video of Klocke's song at https://www.youtube.com/watch?v=7fiuQcAqYmc. The team and coaches boarded the bus and began their trip to the national tournament at 1:30 p.m.

Even if you can't attend the tournament in person, you can be a part of the action via live Web streaming. Find a link at www.naia.org. Comets fans were out in full force at the Campus Center Luckasen Room Thursday, March 13 to watch the Comets in the first round game. The Comets defeated Cornerstone and will advance to the second round of the tournament, playing College of the Ozarks Friday, March 14 at 12:00 noon. The viewing party will begin at the Luckasen Room shortly before noon. Everyone is welcome! Come to campus and join in supporting the team from home. 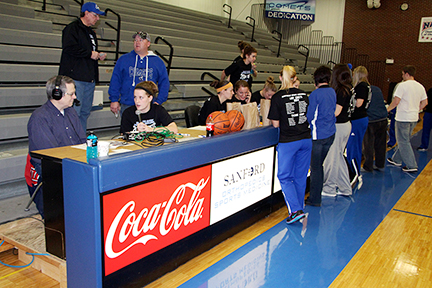 It takes significant funding to send a team to a national tournament. To help defray expenses associated with the trip, Mayville's local radio station, KMAV (105.5 FM or KMAV.com), hosted a telethon on Monday morning, March 10, from 9:30 to 11:30. During the telethon, broadcast from the MSU Lewy Lee Fieldhouse, the coaches and players were interviewed and Comet boosters called in with their monetary contributions for the team. As of Wednesday afternoon, March 12, more than $5,100 had been contributed. Donations are still being accepted.

Get all the details about Mayville State's participation in the 2014 women's basketball national tournament at www.msucomets.com and www.naia.org.