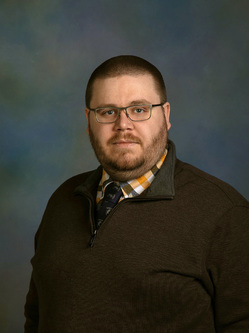 Mayville State University’s new esports program will make its debut in the Fall Semester of 2020. Esports bring the competitive spirit of video games into a team-based atmosphere. Student athletes compete to show off teamwork and strategy, the keys to victory within the games.

Esports focus on hand-eye coordination, perception, reaction time, and mental fortitude over the more physical conditioning of other sports. Like student athletes in traditional sports, esports student athletes require competitive spirit, endurance, and game knowledge and understanding in order to be successful.

Just like in traditional athletics, esports coaches help to shape and mold the team with advice, drills, and strategy. Matthew Berglund, who has recently been hired as the Director of Esports Programs, will serve in this role at Mayville State.

The youngest of four brothers, Matthew Berglund, who was raised in Johnson City, Tenn., grew up in an environment of competition. He started out playing traditional sports with his brothers, and transitioned to gaming in middle school. While in college, he began to compete against others online and compete in a few local tournaments, working to increase his own skill. His love of competition, as well as knowledge and skill led him to a deep love of the esports scene.

“I have been following the esports professional scene since 2011,” said Berglund. “It rekindled my passion for gaming and sports, and it opened my eyes to the possibilities of gaming as an educational tool that could, and would, find its way into colleges and high schools.”