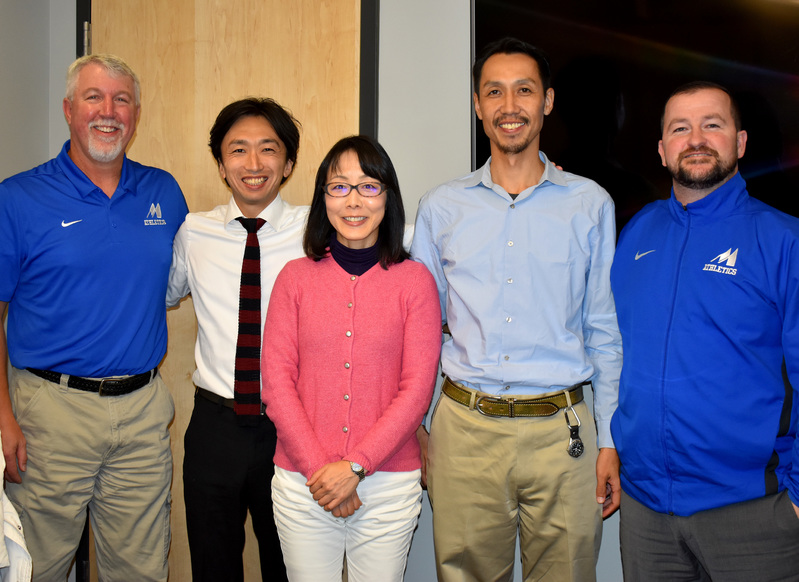 Mayville State University Athletic Director Ryan Hall and Head Athletic Trainer Tim O’Brien had the honor of hosting a delegation of three representatives from Ritsumeikan University in Kusata, Shiga, Japan, on Thursday, Nov. 7. The group from Japan was interested in learning more about Mayville State University’s athletic programs and department, and had the opportunity to tour the MSU campus and athletic facilities.

The Japanese delegation was led by Hidefusa “George” Okamatsu, Ph.D., Athletic Trainer, Certified and Certified Strength and Conditioning Specialist; and also included Tomikazu Saito, assistant manager of the Office for Athletes and Sports Services; and Kyoko Nakamura, who works in the Office for Athletes and Sports Services at Ritsumeikan. Their goals for the visit were to learn about how athletic departments across the different collegiate levels in the United States are run and to determine if some of the ideas the learned of could be incorporated into their programs. The group had a long laundry list of questions to ask. The questions dealt with staff; student-athletes; support in terms of athletics, academics, and health; and governance at the university and national levels.

George is a former athletic training student and graduate assistant at NDSU. During that time, he became acquainted with Mayville State’s Tim O’Brien. George has another connection to the Mayville-Portland community as well. His aunt was a foreign exchange student who lived in the May-Port community in the mid-1970s.