Mayville State’s Haley Anderson excels on and off the court 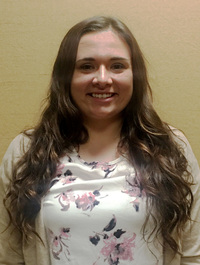 Participating in a varsity sport while pursuing a college degree is very time-consuming. Players are routinely asked to work out early in the morning, go to classes all day, practice in the evening, do homework, and then get a good night’s rest. It’s always a challenge for student-athletes to stay focused with everything they have going on, but one of Mayville State University’s women’s basketball players has managed to balance her school work and team responsibilities while pursuing another of her passions off the court.

Haley Anderson, Lisbon, N.D., was named the outstanding senior of the North Dakota State Simmental Association at the annual banquet held in Bismarck, N.D. in December. She was nominated for the recognition because of her high work ethic and her achievements while working with the Simmental breed.

Haley raises Simmental cattle on her family’s commercial-based operation, and her passion for cattle transfers to the show ring, where she competes around the state and at national shows. Most recently Haley showed in Minneapolis-St. Paul at the Junior Nationals. A highlight of this show was her earning the opportunity to advance to the senior showmanship finals.

Haley is a junior and a forward on the Mayville State women’s basketball team. She is pursuing a major in business administration and a minor in coaching. She would like to return to the family farm/ranch after she graduates and hopes to take over the operation some day.

“Receiving the North Dakota Junior Simmental Association Outstanding Senior Award means a great deal to me because I am truly passionate about the Simmental breed,” Anderson explained. “I am grateful for the Association because it has given me many opportunities to meet new people and to travel to places I never thought I would visit. I am very thankful for this award.”