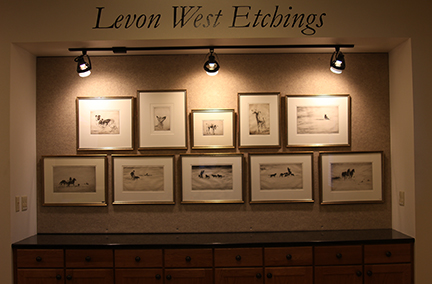 Mayville State was the fortunate recipient of a collection of 111 of Levon West’s etchings at the time of the university’s centennial in 1989. The collection now has a new permanent home in the Edson and Margaret Larson Alumni and Leadership Center at the university. A different series of West’s work will be featured each month in the new gallery which is located in the Legacy Board Room at the Larson Center at Mayville State University.

Led by the efforts of volunteer Doug Anderson, historic Northwest Hall, built in 1911 on the Mayville State campus, has been renovated for use as an alumni and leadership center. The project was funded by private donors who wished to honor their families and loved ones.

The Legacy Board Room, located on the main floor of the Larson Center, was sponsored by Mayville natives Joanie (Groth) and Trueman Tryhus of Scottsdale, Ariz. Joanie and Trueman did this in honor of the Elken, Groth, Larson, and Tryhus families, who left a legacy of support and community pride for Mayville and Mayville State. Joan was a family friend of the West family and admired Levon West’s work, so it is very fitting that this gallery would be located in the Legacy Board Room.

To properly display the etchings at the Larson Center, track lighting and an appropriate backdrop have been installed, and new signage marks the area. A generous gift from the Northern Lights Gallery of Mayville helped to make this work possible. The project was also supported in part by the Mayville Women’s Club; a grant from the North Dakota Council on the Arts, which receives funding from the North Dakota Legislature and the National Endowment for the Arts; Dr. Ronald and Thea Reilkoff of Minneapolis, Minn.; and Cynthia and Lee Kaldor of Bismarck, N.D.

At the time the collection was donated, Peter West, the son of Levon West, stated “My father’s works are part of your heritage as well as mine, and it is lucky that the works are in a form that allows both of us to share in its enjoyment. I can’t think of a better place for a collection of his etchings to be housed.” The new gallery area in the Larson Center will provide a beautiful setting in which all can enjoy Mr. West’s etchings.

The current exhibit at the Larson Center displays West’s dog series and will be available for viewing November 1 through November 30. The public is invited to stop by and take a look.

Levon West was a master of lines. He used lines to show texture, value, and movement. His use of contrast plays on the importance of what he wanted the viewer to connect to at first view. In his 1927 etching “Portrait of a Wasp,” he features a dog captivated by a wasp. Even though the dog dwarfs over a small wasp, the dog shows curiosity and puzzlement when studying the wasp. The viewer can feel the emotion of the dog’s caution. West’s use of line and value creates a fun, almost humorous composition. Other works in the dog series, such as “Russian Wolf Hound” and “Arrogance,” show West’s technique which gave him worldwide recognition as a great artist.

Levon West was born in Centerville, S.D. He was valedictorian of his high school graduating class in Harvey, N.D. and went on to graduate from the University of Minnesota in 1924. His father was a Congregational minister who served in a number of North Dakota towns. He was pastor of the UCC church in Mayville in the early 1900s.

While in New York studying at the Art Students’ League, Levon West formed an aviation corporation with friends. They serviced planes at Roosevelt Field on Long Island. One day he noticed a different type of plane and sketched it. This plane belonged to Charles Lindberg. When West heard Lindberg flew the Spirit of St. Louis on a record breaking trans-Atlantic flight, he hurriedly did an etching from his sketches and took it to the New York Times. The paper asked how much he wanted for it, and he said, “I don’t care how much I get for it, but put my name on it good and big at the bottom.” When the newspaper came out with his etching on the front page, demand for his work followed. This led to a series of successful etchings and national prominence. West’s etching, “Ireland,” which depicts Lindberg’s plane, is among those in Mayville State’s collection.

Levon West was also a skilled watercolorist, and later in his career began working with color photography. He adopted the pen name “Ivan Dmitri” and associated it with his photographic works. A pioneer in color photography, he wrote several books on the subject.

Dmitri’s color photography appeared quite often on the cover of the Saturday Evening Post magazine. The first color photographic cover on the Saturday Evening Post (May 29, 1937), a photo of an automobile racing driver seated in his race car, was by Dmitri. Another SEP cover (May 16, 1942) was a photo of General “Hap” Arnold and a B-17 crew planning a flight, with B-17s flying overhead. This cover was so popular that the United States used the photo image to print a very rare WWII (war effort) poster. Prints of these two magazine covers, and several others featuring Dmitri’s work, are framed and hanging at the Larson Center. These prints were donated by Joanie Tryhus. Cost of framing them was covered by a gift from Mayville Women’s Club.

As Ivan Dmitri, he helped to gain acceptance for photography as an art medium, and established one of the first photography exhibits at New York’s Metropolitan Museum of Art. Dmitri felt that such a move was necessary in order for the public to treat photography as art, rather than just something reserved for smaller mediums like books, magazines, and newspapers. In 1959, Ivan Dmitri founded Photography in the Fine Arts.

Dmitri received the North Dakota Theodore Roosevelt Rough Rider Award in 1962. He was the third person ever to receive this distinction.

“We invite the public to stop by the Edson and Margaret Larson Alumni and Leadership Center to view the Levon West and Ivan Dmitri artwork that is on display,” said Doug Anderson, volunteer coordinator of the renovation of historic Northwest Hall on the campus of Mayville State. “We are fortunate to have these treasures in our midst, and I hope people will take the opportunity to become familiar with them. Thank you to our generous donors who made the gallery area at the alumni and leadership center possible, and thank you to those individuals who worked so hard to bring the artwork to Mayville State 25 years ago.”

Photo caption: This photo shows the new Levon West etchings exhibit area in the Legacy Board Room of the Edson and Margaret Larson Alumni and Leadership Center at Mayville State. The current exhibit features the dog series.