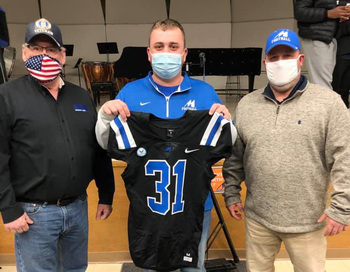 On the evening of March 1, Comets head football coach Rocky Larson asked local veterans Harlan Johnson and Jason Perkins to join him on stage in the Classroom Building Auditorium, where members of the football team were assembled. Coach Larson had a surprise for his players, who watched intently as Rocky opened a box and revealed a new jersey style. Each jersey, which will be worn only once each year, on Military Appreciation Day, contains the logo of a branch of the U.S. Military. The room erupted with cheers of excitement as the box was opened and the new jersey was revealed.

Stay tuned for more information about Comets Football Military Appreciation Day, which is scheduled for Saturday, Oct. 16. Planning is underway and we expect that it will be a day filled with activity and an opportunity to show our gratitude for our veterans and U.S. Military personnel.

Mayville State University’s commitment to showing respect for veterans and members of the U.S. Military is a tradition. One place where that respect can be witnessed each and every day is at the Military Honor Garden, located on the south lawn of the Edson and Margaret Larson Alumni and Leadership Center on campus.

Martin Johnson, 1966 Mayville State graduate and USMC Corporal, and USMC Lieutenant General Emil “Buck” Bedard, 1965 Mayville State graduate, head up the Military Honor Garden project. These men have worked hard to ensure that the Military Honor Garden is an extra-special and meaningful tribute to those who bravely served and those who continue to serve, to uphold our country’s liberty and freedom.

The Military Honor Garden features a life-sized bronze eagle in flight sculpture, flags, night lighting, and gardens. Five branches of the military are represented on the granite centerpiece on which the eagle sculpture stands. This beautiful and meaningful project is a tribute to Mayville State employees, students, and friends, and community men and women for their patriotic service in America’s Armed Forces. The intent is to honor anyone who has served in the military. Those honored definitely can be, but do not have to be, Mayville State alumni.

Many people have made gifts of $500 or more to the project so that they can have the name(s) of their loved ones engraved on granite plaques that are incorporated into the memorial walk. In addition, the late Valorie Brown, Cavalier, N.D., donated the amazing bronze eagle statue in memory of her husband, David G. Brown, a 1971 graduate of Mayville State who passed away several years ago. Two beautifully engraved granite benches flank the eagle statue. One was donated by Dixie and Larry McGillis in honor of Dixie’s dad, Edwin, and his six brothers, all who served in World War II, and all who came home to Edmore, N.D. The second bench honors and remembers all American military recognized as KIA, POW, and MIA. The bench was provided by friends and teammates of Melville “Buzz” Lurth, Jr., who attended Mayville State in the late 1960s and was killed in Vietnam in 1969.

There is room for expansion at the Military Honor Garden. If you’d like to sponsor a granite plaque in honor of a loved one, please contact the MSU Foundation staff at alumni.mail@mayvillestate.edu or 701-788-4687 to learn more. You can also see more information and make your gift online at www.mayvillestate.edu/militaryhonorgarden. Now is the time to make a commitment if you’d like to have a plaque in place for Memorial Day.

When you purchase an engraved plaque to be placed in the Military Honor Garden, a portion of the funds will be used to support the Veterans Honor Scholarship Endowment, which was established with substantial gifts from Emil and Linda Bedard and Martin and Diane Johnson. Earnings on the endowment fund scholarships that assist veterans who are pursuing degrees at Mayville State.

Over the decades, throughout all the conflicts and World Wars, hundreds of veterans from Mayville and Traill County have gone off to serve their country and have then returned home to pursue college education. College students who have served in all branches of the military have walked the campus of Mayville State, and after graduation, have brought that same spirit of service and leadership to their occupations as they brought to their selfless service of country. This endowment was created to honor their service and memory, especially for those who fell in battle.

We owe a great debt of gratitude to our veterans and U.S. Military personnel. It makes me Comet Proud to see how Mayville State’s tradition of respect for these celebrated heroes shines through various projects and events. Each of these actions represents our way of saying, “Thank you for your service.”