Coach Berry will be inducted into ABCA Hall of Fame 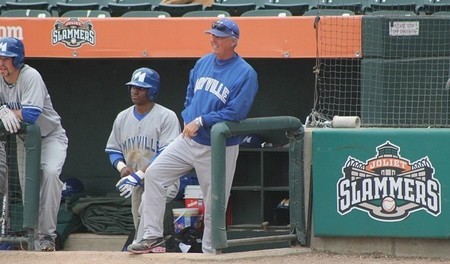 The American Baseball Coaches Assocation (ABCA) has announced that Mayville State University Head Baseball Coach Scott Berry has been named to the 10-member 2017 ABCA Hall of Fame class. Induction to the ABCA Hall of Fame is the highest honor bestowed by the organization. Inductees will be honored in a ceremony planned for Jan. 6, 2017. Festivities will take place during the ABCA/Diamond Hall of Fame/Coach of the Year Banquet at the ABCA Convention in Anaheim. The ABCA was founded in 1945 and the Hall of Fame began in 1966.

Scott Berry became one of the six active NAIA coaches to have eclipsed the 1,000-win mark during the 2016 season. The 2014 ABCA President took over as head coach at this alma mater, Mayville State, in 1982. He has grown the Mayville State program into an NAIA powerhouse.

Under Berry's guidance, the Comets have won 23 regular season conference championships, including 17 consecutive titles from 1986 to 2002. Additionally, the Comets have collected 21 conference tournament championships and have appeared in the NAIA national playoffs 26 times, including in 2016. In those 26 appearances, Berry's teams have won three NAIA regional titles, the 2002 Plains Super Regional title, and had a top-five finish at the NAIA World Series.

Berry's career record as head coach stands at 1,012-573-1, which is good for a .683 winning percentage. He ranks fifth among active NAIA coaches in career wins depsite the fact that more than 75% of the games in his career have been played away from Mayville State's Scott Berry Field, which was named in his honor in 2010.

Prior to his career as a coach, Berry attended Mayville State, where he lettered four years under ABCA Hall of Famer Al Meyer, receiving All-Conference honors his junior and senior seasons. After graduating from Mayville State, Berry coached high school baseball teams in Ellendale, Binford, Rolla, and Casselton, North Dakota. He returned to his alma mater as an assistant under Meyer in 1981 and became the head coach the following year. Berry also coached the summer amateur baseball team in Mayville, with his "Red Caps" competing in the state finals six out of seven years and coming away with championships in 1981 and 1984.

A very active participant in local, state, and national baseball organizations, Berry has been heavily involved with the ABCA for four decades. In addition to serving as ABCA President in 2014, Berry currently serves on the ABCA's Board of Directors and Nominations Committee. Additionally, Berry has been involved in the North Dakota Baseball Coaches Association, North Dakota Amateur Baseball Coaches Association, North Dakota College Athletic Conference, and USA Baseball.

See more information about the 2017 ABCA Hall of Fame class.