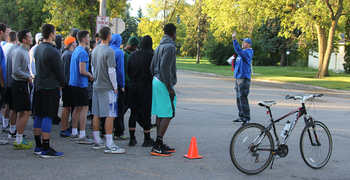 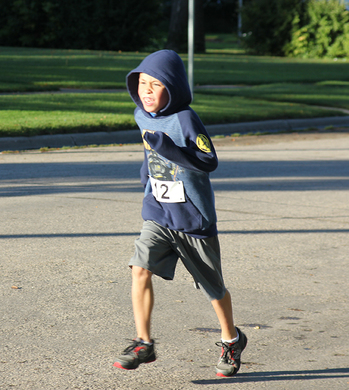 Lois Karlstad and Cheryl Angen, both of Mayville, were this year’s co-chairs for the festivities. Other Farmers Bowl committee members were Doug Anderson, Dena Bergstrom, JoDee Dungan, Rick Karboviak, Leah Larson, Ashley Mooney, Rhonda Nelson, Mindy O’Connor, Beth Swenson, and Ann Willeson. These folks were assisted by the MSU Athletic Department, the MSU athletes, members of the MSU Collegiate DECA organization, and many others.

A nice crowd of young and old enjoyed the traditional corn and hot dog feed under the tent just outside of Jerome Berg Field following the parade. A farmers market and craft sale was also located in this area, and people could shop for things such as purses and bags as well as fresh vegetables.

The Farmers Bowl parade, led by MSU President Dr. Gary Hagen, who was driving an antique John Deere tractor, included a number of antique vehicles and a variety of farm machinery, along with more modern day entries. Several community organizations and businesses participated, as did the MSU varsity athletic teams, and many others. Bands included the May-Port CG High School marching band and a Mayville State group.

The Comets football team came up short in their home contest versus the University of Wisconsin-Stout. Unfortunately, five Comet turnovers led to 17 points for the Blue Hawks, leading to a 23-13 loss. 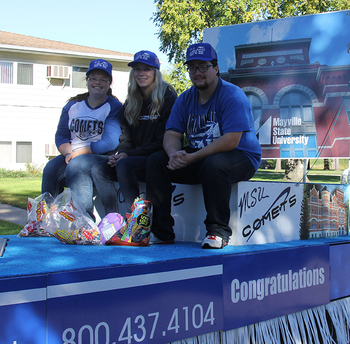 The Farmers Bowl Auction went platinum this year! The 20th annual Farmers Bowl Auction wrapped up the day’s activities in the MSU Campus Center Luckasen Room. Silent and live auction bidders enjoyed great food and spirited bidding on a fantastic assortment of donated items in the annual auction. When all was said and done, the auction and other Farmers Bowl activities generated more than $41,000. Proceeds will be distributed through the MSU Foundation, the MSU Alumni Association, and the MSU Athletic Department for the benefit of Mayville State University and its students.

Those who attended the Farmers Bowl Auction had an opportunity to participate in a scholarship fund-raiser, which generated nearly $3,000 for academic honor scholarships. All scholarship funds raised will receive a 50% match through The Matching Fund for Enhanced Academics established through the work of the 64th North Dakota Legislative Assembly. This means Mayville State will have an additional nearly $4,500 in scholarship dollars to award to students.

Everyone who purchased an admission ticket and attended the Farmers Bowl Auction had the chance to win $500 in a door prize drawing. This prize was made possible through a sponsorship from Lindsey Brown of Pifer’s Auction & Realty. The winner of the $500 was Troy Sand of Mayville.

“Farmers Bowl is the product of many great volunteers working together for the good of Mayville-Portland and Mayville State University. We are very grateful for all who get involved with Farmers Bowl,” said Mayville State President Gary Hagen. “From the people who do the physical work, to those who attend and participate in the 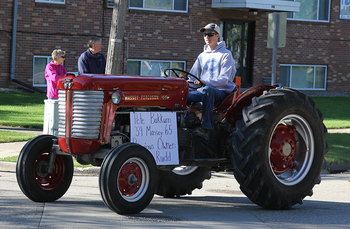 events, to those who donate items for the auction, and those who attend the auction and make purchases, Farmers Bowl is a great team effort. We appreciate all that is done to make Farmers Bowl a success year after year. I add a special note of thanks to Comet Connections sponsors, Lindsey Brown of Pifer’s Auction & Real Estate, and Ray and Alana Gerszewski of Mayville’s Hometown Inn. Because of their generosity, Mayville State and its students will experience even greater benefits as a result of the annual Farmers Bowl activities.” 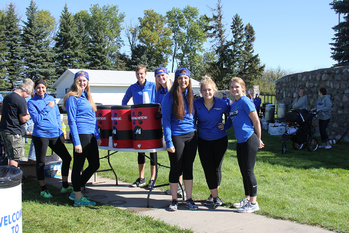 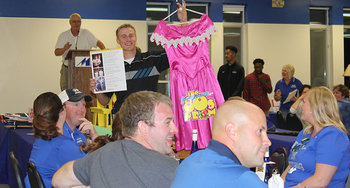 Bottom: Jace Pederson (center) was among the Mayville State men’s basketball players who helped out during the Farmers Bowl Auction, displaying items as they were being auctioned. He is seen here holding the prop promoting the 80s prom party, an item donated by the MSU Alumni Association board of directors. The prom party got the highest bid of all auction items at $2,300. Auctioneer Wayne Trottier of Northwood can be seen in the background working hard to get a high bid on the prom party. Wayne has served as a volunteer auctioneer for the Farmers Bowl Auction for many years. He was assisted this year by Todd Parkman of Hope, N.D.