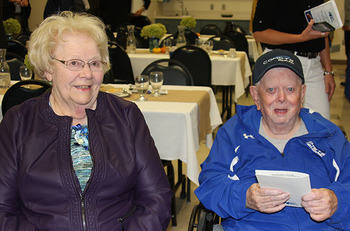 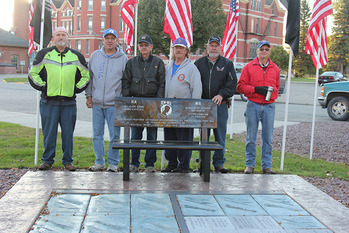 Nick Storhaug, Lisbon, N.D., was inducted into the Athletic Coaches Hall of Fame, in recognition of his successful 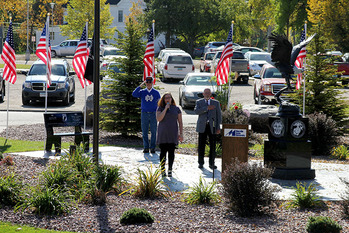 In recognition of her service to the student athletes of Mayville State University, Gwen Shaffer was presented with the MSU Distinguished Service Award.

Following the parade, a ceremony of remembrance was held at the Military Honor Garden on the grounds of the Edson and Margaret Larson Alumni and 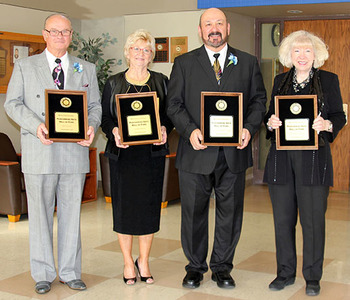 The program ended on a solemn note, with program emcee, retired MSU faculty member Mike Bakken, reading the names of each of the individuals who have been honored by loved ones in the Military Honor Garden project. The ringing of a bell by Mayville State student Briar Bahnmiller, Grandin, N.D., followed each name.

Many of those in the crowd were moved in silent reflection, as when the reading of the names was coming to a close, two bald eagles came from the east and flew over the garden. The bald eagle, our national bird, represents freedom, the very thing all of those who have been honored in the Military Honor Garden worked to ensure for all Americans. The two eagles that flew above those gathered for the ceremony of remembrance conveyed a very special and touching message to those below.

The Alumni Association board members hosted a chili feed inside the Larson Center following the program.

The honoring of the newest inductees to the Mayville State University Performing Arts Hall of Fame, as well as the traditional MSU Music Department homecoming concert, were a grand finale for a fantastic weekend for Mayville State alumni and friends. The concert was held Sunday afternoon, Oct. 8, in the Classroom Building Auditorium. Inductees Caroline (Knudson) Brown, Rapid City, S.D., Robert Gust, Fargo, N.D.; Dr. Joseph Hegstad, now deceased, but formerly of Minot, N.D. and Scottsdale, Ariz., and David “White Thunder” Trottier, Rugby, N.D., comprised the fifth group of distinguished individuals to be inducted into the Performing Arts Hall of Fame since its establishment in 2013.

Homecoming 2017 culminated with a social to honor the Performing Arts Hall of Fame inductees. Hosted by the Alumni Association board, the social was held immediately following the concert in the MSU Campus Center Luckasen Room.

“Homecoming 2017 was a very special time,” said MSU Director of Alumni Affairs Beth Swenson. “It was a heart-warming celebration of what makes Mayville State University special - the people. It was our privilege to pay tribute to so many wonderful Mayville State alumni and friends throughout Mayville State’s homecoming festivities.”

Top: These individuals were inducted into the Athletic Hall of Fame and Athletic Coaches Hall of Fame during the Oct. 6 banquet. Pictured from left to right are Nick Storhaug, Neil Steffes, Missy Charboneau-Folch, Stu Gilman, and Lonnie Thomas.

Third: Gwen Shaffer (left) received the Mayville State Distinguished Service Award at the Oct. 6 Hall of Fame dinner. Gwen has been an extra-special friend to the athletes of Mayville State and has made sure that her brother, Stan Dakken (pictured on the right), could continue to be the #1 fan of the Comets.

Fourth: This hard-working group of men was responsible for putting up and taking down the Avenue of Flags which enhanced the Mayville State Military Honor Garden throughout the day on Oct. 7. The Avenue of Flags is provided by the local American Legion Post 8. Pictured from left to right are Don Thuen, Tim Sorteberg, Butch Aamold, Larry Dakken, Harlan Johnson, and Rick Aamold. Clark Soholt also helped, but was not present for the photo.

Fifth: The MSU Alumni Association has made it a tradition to hold a ceremony of remembrance at the Military Honor Garden at noon on the Saturday of every homecoming. The Military Honor Garden is located on the grounds of the Edson and Margaret Larson Alumni and Leadership Center at Mayville State. Pictured here are MSU student Caylee Dotson, who is singing “The Star-Spangled Banner,” along with Martin Johnson (left) co-chair of the Military Honor Garden project, and Mike Bakken (right), who served as emcee for the ceremony.