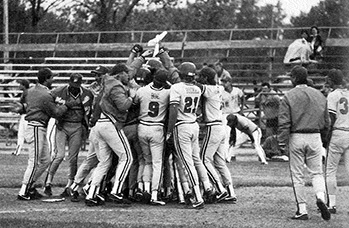 The 1998 baseball team was the first Comets baseball team to win 30 games in a season, finishing with a record of 30-9. The team had a perfect 16-0 conference record in the NDCAC and won the conference tournament. They advanced to the NAIA Area III Tournament in North Platte, Neb., and in the first game of the tournament, defeated Kearney State in one of the greatest come-from-behind wins in Mayville State history. Five members of the team, Hoffner, Roaldson, Reidy, Schwabe, and Booker, hit .400 and higher and Hoffner hit .519. Two pitchers, Matsubara and Biberdorf, had a combined record of 18-1. Hoffner, Reidy, Roaldson, Biberdorf, Matsubara, and Booker were named to the all-district team. Biberdorf was named the District 12 Player of the Year. Biberdorf and Hoffner were named NAIA All-Americans. They were drafted by Major League Baseball organizations and played in the minor leagues. Schwabe and Matsubara played on the Canadian National Team.

Melissa “Charby” Charboneau-Folch played basketball and fastpitch softball at Mayville State from 1998 to 2001. In basketball, she scored 1,022 career points in three years as a Comet, the sixth player in school history to score more than 1,000 points. She led the 2000-2001 team with an 18.65 points/game average, 49% from the floor, and a game high of 29 points. She also led in blocked shots and steals, averaging 2.81 steals per game. She was the only player to earn DAC-10 all-conference honors in the 2000-2001 season and she scored 578 points in her senior year. Charby and her 2000-2001 team were ranked #34 in NAIA Division II, the highest the Comets had been ranked in school history at the time. This was the first Comets women’s basketball team to play for a conference championship. She was a varsity letter winner in softball from 1998 to 2001. She and her teammates played in the Great Plains Region Softball Tournament in 1999. Melissa graduated from Mayville State in 2002, earning a Bachelor of Science in Education degree.

Stuart Gilman was a four-year starter for the Comets in baseball, from 1980 to 1984. He was selected as team most valuable player in both defense and offense in two separate years. He was an all-conference player for the North Dakota College Athletic Conference three times and an all-District 12 player twice. Stu was a member of Comet teams that were named conference champions and/or district champions for several years. He was a team captain in 1983 and 1984. The Mayville State baseball program was very successful while Gilman was playing and he was a big part of that success. Not only was he a tremendous athlete, he was a great student. He graduated with a Bachelor of Science in Education degree in 1984, earning a major in business education and a minor in physical education.

Neil Steffes played basketball for the Comets from 1987 to 1992. He was a three-year letter winner and was named all-conference in 1990-91 and 1991-92 and all-conference honorable mention in 1989-90. “Nightmare,” as he was known, led his 1989-90 team to become the first men’s basketball team in Mayville State history to win a conference championship. This was quite an accomplishment, since the team started the season 0-5. After the fifth loss, head coach David Noles inserted Steffes into the lineup as point guard. The Comets lost the next game, but with Nightmare as the starting point guard, they reeled off 19-straight wins in the games that followed. He was point guard for two of the most prolific scorers in Mayville State history, MSU Athletic Hall of Famers Todd Olson and Cedric Weatherspoon. Scoring did not define Neil’s game. He scored when he needed to, but he defended the best perimeter players, set up the people who were the team’s scorers with assists and picks, and ran the team as point guard. Steffes was awarded a Bachelor of Science in Education degree in the fall of 1992, earning majors in social science and physical education and a minor in coaching.

Lonnie Thomas (LT) was a letter-winner in baseball and football at Mayville State.
He started as a safety on the junior varsity football team and qualified as a varsity player in 1974. In 1975, he pitched for the junior varsity baseball team and notched a record of 2-0. Starting on varsity in 1976, his record was 4-0. His pitching record in 1977 was 8-1 and in 1978 was 8-5. Thomas was voted Mayville State’s co-most valuable player and was named to the all-conference team as well as the all-District 12 team in 1977. He was the team’s co-captain in 1978. LT’s overall record was 22-6. Legendary Comets head baseball coach Al Meyer was Lonnie’s coach for all four years in which he played. Coach Meyer handed him the ball 28 times and Thomas finished all but one game. He and his Comets teammates kept Coach Meyer over the 500% mark with lots of hard practice and good teamwork.

Nick Storhaug was the head wrestling coach at Lisbon (N.D.) Public School from 1974 to 1992 and head football coach from 1977 to 1984. He was also the school’s athletic director from 1978 to 1982. Nick led his teams to two state championships, in 1978 and 1983; two runner-up finishes, in 1980 and 1981; and three third-place state meet finishes, in 1976, 1987, and 1988. In all, Nick coached 12 teams to top-five finishes at the state level. Lisbon had 18 individual state champions and 80 state place-winners during Nick’s tenure. He coached four high school All-Americans. The Broncos were regional champions 15 times. The Broncos had a 217-21 dual meet record against Class B competition under Nick’s leadership. He was named the North Dakota High School Coaches Association Class B Wrestling Coach of the Year three times, in 1976, 1978, and 1987. He was president of the Class B Wrestling Coaches from 1979 to 1985 and served on the advisory board to the North Dakota High School Activities Association. Nick graduated from Mayville State with a Bachelor of Science in Education degree. He earned majors in business education and physical education.

Gwen Shaffer has been an extra-special friend to the athletes of Mayville State. Since returning from the state of Washington to her hometown of Mayville in the early 2000s, she has rarely missed a home game. Gwen has treated the members of the teams and their families, as well as the coaches and their families, as members of her own family. She has often provided meals and lodging, and also helped out with other things they may have needed along the way. Because of her wonderful hospitality, Mayville has become a beloved “home away from home” for the student athletes she has befriended. Gwen and her brother, Stan Dakken, were grateful for the opportunity to travel to Point Lookout and Branson, Mo. for the national men’s basketball tournaments during the Comets’ runs there. They also recently attended the national women’s basketball tournaments in support of the Comets. Gwen has made sure that Stan could continue to be the #1 fan of the Comets, a true gift not only to Stan, but to all of the players, coaches, and other Comets fans.