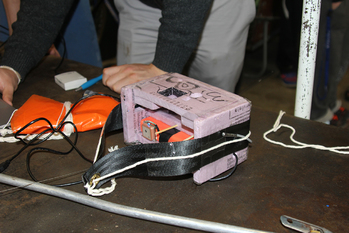 Mayville State University faculty, staff, and students teamed up with students and faculty from Bismarck State College for a successful near-space balloon launch Saturday, Sept. 10. Those involved were up bright and early that morning as they prepared for a target 7 a.m. launch from the parking lot northwest of Mayville State’s Old Main. Four Mayville State students held the balloon and payload until all was in order. Then the approximately 6-foot-in-diameter helium-filled balloon and attached payload were released and it quickly ascended high above Mayville, heading in the direction of Blanchard, N.D.

Dr. Tony Musumba, associate professor of physics at Bismarck State, and Dr. Aaron Kingsbury, assistant professor of geography at Mayville State, headed up the project. This was Dr. Kingsbury’s first experience with a near-space balloon launch, while it was the fourth time Dr. Musumba had done this.

The project began long before launch day, as preparations were made. Among the things that needed to be done were to get permission from the Federal Aviation Administration (FAA). A balloon like this has the potential to be a hazard to aircraft. All the “i”s 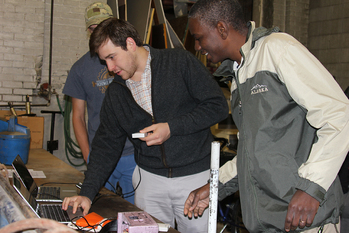 needed to be dotted, and all the “t”s crossed.

Three pre-launch informational sessions were held in the MSU Campus Center Luckasen Room Friday, Sept. 9. Each of the interactive presentations began with a brief background of high-altitude ballooning and basics of organizing and tracking a payload. Examples of the stunning images typically taken by high-altitude balloons on the ascent to and at near-space were presented. High-altitude ballooning was then linked to a number of authentic STEM (Science, Technology, Engineering, and Mathematics) experiences available to K-12 students, including the planning of the project, calculating launch parameters, working with scientific instrumentation and communication systems, date logging and analysis, and solving unique engineering challenges. Practical advice on how to begin a high-altitude ballooning program, including information on cost and safety issues and where to seek assistance locally, was discussed.

What is involved in a near-space balloon launch?

The equipment includes a helium-filled balloon, which is about 6 feet in diameter on the ground, but swells to a much larger size in the 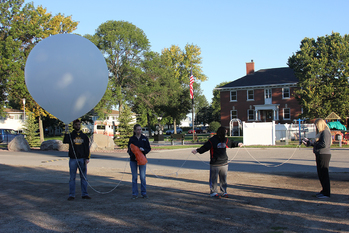 very low pressure of near-space. The balloon, which eventually bursts, is equipped with a camera and data sensors, and the attached parachute helps the payload package return to earth safely. The whole process of ascent and return to earth takes about two or three hours. The payload is tracked with GPS so that participants can retrieve it when it reaches the ground and later analyze the data captured.

There was an excellent turnout of students, staff, faculty, and others on launch day. Under perfect weather conditions the launch went smoothly. After the balloon began its ascent, several participants got into vehicles and caravanned across eastern North Dakota and western Minnesota trying to calculate/predict where the payload would descend. The balloon reached an altitude of 97,000 feet, which is near-space, before it burst. The payload descended north of Hawley, Minn. in an enormous unharvested field of corn. At which point, the GPS tracking device in the payload went silent. Rotten luck! The group spent many hours combing the field, but the payload was not recovered. Although labeled with contact information, project 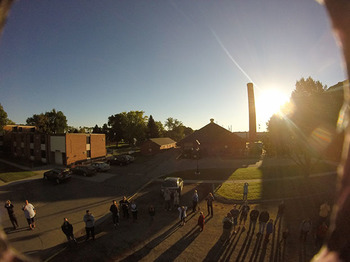 leaders did not think it would survive the combine at harvest. Obviously, losing a payload is never ideal, but it is a risk inherent in ballooning. Thankfully, the payload was later located using different technologies by the very experienced ballooner Mike Holman, an Associate Professor of Electronics at Bismarck State College.

High-altitude ballooning has a long history in facilitating scientific discovery in fields such as atmospheric science, meteorology, physics, chemistry, and remote sensing. It can also be a powerful motivational tool for students in K-12 STEM education. For this reason, three teacher education classes of MSU Associate Professor of Science Jeff Sieg are working with the project, along with local K-12 teachers.

When the data has been collected from the high-altitude balloon payload, more Mayville State students will have the opportunity to be involved. There will be side projects conducted with selected classes and students of Assistant Professor of English Erin Lord Kunz, Director of Cultural Diversity and Inclusion Dina Zavala-Petherbridge, and Dr. Aaron Kingsbury. 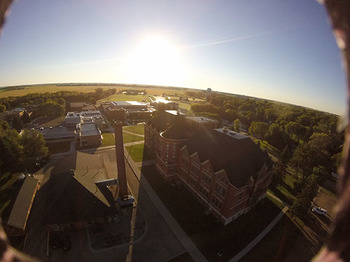 Top: The payload includes a camera and GPS tracking equipment.

Second: Dr. Tony Musumba and his current and former Bismarck State College students made the technical preparations for the launch on Saturday morning, Sept. 10.

Third: Four Mayville State students held the balloon and payload until it was time to launch. 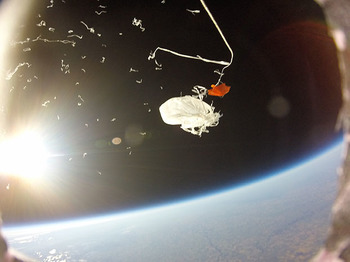 Fourth: Those who came to help with the launch and spectators are photographed from the payload as the balloon’s ascent begins.

Fifth: This cool photo of Mayville State’s Old Main was taken from the payload attached to the ascending balloon.

Bottom: This photo shows the balloon bursting when it reaches
97,000 feet. Note the orange parachute that helped the payload reach the ground safely.

Images from the launch as viewed from the balloon ...