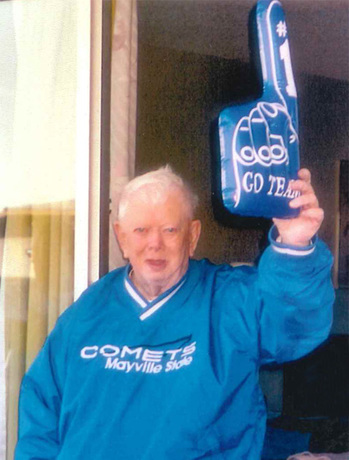 Stan “The Man” Dakken, a Mayville State icon, will celebrate his 80th birthday on Sunday, Aug. 7, 2016. He is eager for people to join him at an open house 80th birthday party from 2 to 5 p.m. at the Mayville Senior Center, 31 1st Ave. N.E. There will be an open mic throughout the afternoon for greetings and memory-sharing. If you can’t make it to the party, but would like to send Stan a card, his address is Room 76, Luther Memorial Home, 750 Main St. E., Mayville, N.D. 58257.

Stanley is an honorary member of Mayville State University’s Athletic Hall of Fame and was awarded Mayville State’ first-ever honorary degree on July 28, 2001, during Mayville-Portland’s Stan Dakken Days. The three-day celebration was held in honor of Stan’s 65th birthday. The degree conferred was a Bachelor of Humanity, with majors in kindness and good works. In part, Stan’s diploma reads, “In recognition of a lifetime of humanitarian achievements while attending Mayville State University events and participating in the greater community. The university is proud to be associated with Stanley LeRoy Dakken. We hope he has learned as much from us as we from him.”

Stan was inducted to the Mayville State Athletic Hall of Fame, as an honorary member, on Oct. 1, 1993. The following essay, written by Stan’s nephew, Dave Dakken, appeared in the MSU Today that September.

Picture a young man sitting in a first grade classroom, mostly alone, set off in an area by himself while the other children learn ABC’s, reading, and 1 + 1 = 2. He has a few baby blocks and maybe some crayons to play with, but he knows through this separation that something is different. There were times when he would wander off, unnoticed, only to be returned when someone realized he was missing.

It was a difficult situation. The teacher wasn’t sure what was wrong with him; he simply had trouble learning. She couldn’t spend the one-on-one time that was necessary to help him, especially at the expense of hindering the progress of the others.

No team teaching or student teachers in those days. The educational system in the early 1940’s wasn’t yet prepared to handle learning disabilities. They didn’t have special education or remedial specialists either, little research or methodology had reached Mayville, North Dakota.

After two years of indifference and boredom the youngster figured, more or less by himself, that it was time to move on. He had had enough of first grade and decided to go to college – Mayville State to be exact. And, he flourished!

All of a sudden he was receiving attention from everywhere. He acquired many friends, as teachers, who were also attending college. He lived off campus, but just across the street, so he often ate at school and took naps in the rooms of his buddies like Nuts Anderson or Art Hovde, and through the years, others too numerous to mention.

At about age eight he committed himself to a double major program – Humanity and Philosophy. He studied his lessons well. He was attentive to conversation and actions, and he remembered why people were happy and what made them so. He absorbed their humor and loved it to the degree that he never forgot the faces of those that let him feel accepted.

For years he would rise at the crack of dawn and go to school. Most of his colleagues and friends were still asleep, so he would go visit the “Power House.” There, from Bill Reinhart and Joe Johnson, he learned about machines and tools. He liked to take things apart and see what made them tick. This was his “tech” school where the seed was sown for his later interest in construction, engineering, and big machinery.

He continued his education while literally hundreds of his friends graduated and pursued careers and different lifestyles. He too received his master of humanity and doctor of philosophy degree. But for him, Mayville State had become an inseparable part of his life, and he never really left. It’s impossible not to notice him at campus functions or at a football or volleyball games. Since the early days he has consistently supported his team, his college.

Fate requested that he touch many lives, that he share his knowledge of humanity and disburse his philosophical insight. He is a guru of sorts. He lifts people’s spirits in a unique but simple way.

He is a living conundrum! No one would be willing to exchange their lot in life for his, yet they envy his openness and happiness. He doesn’t have that ego that compels common people to compare themselves to things they don’t have or can’t do. He is unencumbered by the web of stress and uncertainty that most people weave for themselves. His innocence is sometimes taken advantage of but never tarnished; nor does he require reassurance to qualify success of existence.

Although he often speaks in humorous riddles – an illogical logic that leaves people laughing and scratching their heads – his message is clear and they laugh with him, not at him.

What is it that he possesses and what do we learn from him?

He has that intrinsic “It-ness” that gave the cowardly lion courage, the tin man heart and the scarecrow a brain; that basic understanding of goodness and trust in the human spirit. Unknowingly, he reflects that “will to believe” that there is a “correctness” to it all!

From his simplicity we learn that we aren’t all that important and are reminded that we have to keep ourselves in proper perspective. He is the Thumb that God has given us to again find our page in the book of life.

Because he is inextricably inter-woven into the fabric of this community and Mayville State, he has now been chosen to receive yet another honor. During homecoming activities this October 1 and 2, Stan will be recognized at the Hall of Fame banquet. He will thoroughly enjoy it. His family is touched and grateful.

A bright beam will always shine in the halls of Mayville State tradition. Stan, the man!