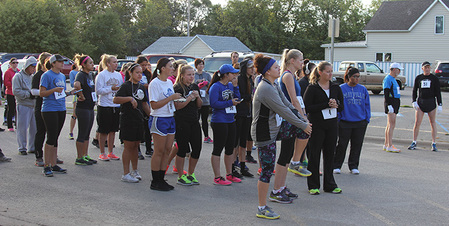 Lois Karlstad and Cheryl Angen, both of Mayville, were this year’s co-chairs for the festivities. Other Farmers Bowl committee members were Doug Anderson, Dena Bergstrom, JoDee Dungan, Rick Karboviak, Kate Keating-Peterson, John Klocke, Leah Larson, Ashley Mooney, Rhonda Nelson, Mindy O’Connor, Kelli Odden, Beth Swenson, and Ann Willeson. These folks were assisted by the Comet Athletic Club board and other members, the Cometeers, the MSU athletes, and many others. 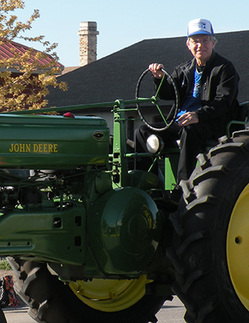 The Farmers Bowl festival started out with the “Field Frenzy Farmers Bowl 5K” run/walk, which was coordinated by Rick Karboviak. The race began and ended in front of Mayville State’s historic Old Main. The course went through the Mayville State campus, making a jaunt into Jerome Berg Field. Overall winner of the race was Al Koshney of Mayville. Kathy Benneweis, Enderlin, N.D., came in first in the women’s division. Fifty-four people, including Mayville State’s entire women’s softball team, finished the race.

A nice crowd of young and old enjoyed the Comet Athletic Club’s traditional corn and hot dog feed under the tent just outside of Jerome Berg following the parade. A farmers market and craft sale was also located in this area, and people could shop for anything from garden decorations to fresh vegetables.

The Farmers Bowl parade, led by MSU President Dr. Gary Hagen, who was driving an antique John Deere tractor, included a number of antique vehicles and a variety of farm machinery, along with more modern day entries. The Girl Scouts participated, as did several area businesses, the MSU varsity athletic teams, and many others. Bands included the May-Port CG High School marching band and the First and Farmers Philharmonic.

The Comets football team was victorious in their home contest versus Trinity Bible College. Comets defense was able to keep the Lions off the scoreboard the entire second half, which steered the Comets offense to take the field and collect a total of 51 points in the game. Their opponents ended up with 14.

The 19th annual Farmers Bowl Auction wrapped up the day’s activities in the MSU Campus Center Luckasen Room. Silent and live auction bidders enjoyed great food and spirited bidding on a fantastic assortment of donated items in the annual auction. When all was said and done, the auction and other Farmers Bowl activities generated nearly $50,000. Proceeds will be distributed through the MSU Foundation, the Alumni Association, and the Comet Athletic Club for the benefit of Mayville State University and its students. 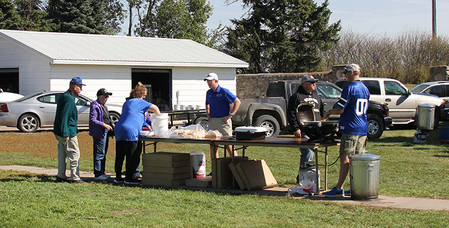 This year, those who attended the Farmers Bowl Auction had an opportunity to participate in the Harvest of Hope scholarship fund-raiser, which generated nearly $3,000 for academic honor scholarships to be awarded to incoming freshmen. All funds raised in the Harvest of Hope fund-raiser will receive a 50% match through The Matching Fund for Enhanced Academics established through the work of the 64th North Dakota Legislative Assembly. This means Mayville State will have an additional nearly $4,500 in scholarship dollars to award to incoming students. 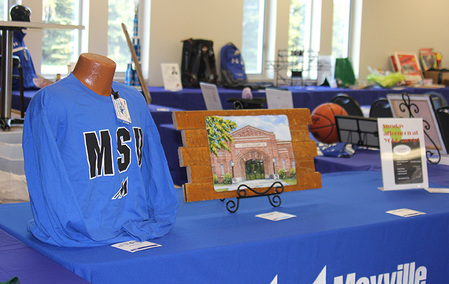 Everyone who purchased an admission ticket and attended the Farmers Bowl Auction had the chance to win $500 in a door prize drawing. This prize was made possible through a sponsorship from Lindsey Brown of Pifer’s Auction & Realty. The winner of the $500 was Bonnie Enger of Portland, N.D. Lindsey Brown also sponsored a raffle in which people could purchase a $20 chance to win $500. Winner of this cash prize was Lee Ann Strand, also of Portland.

Alerus sponsored the silent auction event at Farmers Bowl 2015. The silent auction featured nearly 100 donated items that were very popular with auction-goers. In addition, Kelley Bean sponsored a key raffle in which 200 keys were sold in a blitz by the MSU women’s basketball team. People who purchased the keys had a better than 50:50 chance of winning a prize.

“Farmers Bowl is the product of many great volunteers working together for the good of Mayville-Portland and Mayville State University. We are very grateful for all who get involved with Farmers Bowl,” said Mayville State President 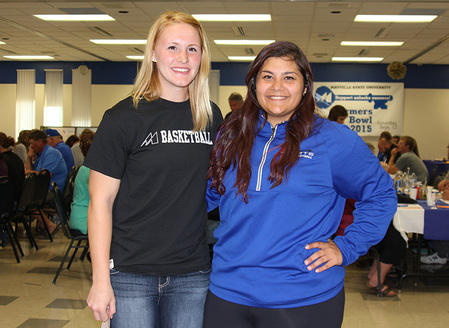 Gary Hagen. “From the people who do the physical work, to those who attend and participate in the events, to those who donate items for the auction, and those who attend the auction and make purchases, Farmers Bowl is a great team effort. We appreciate all that is done to make Farmers Bowl a success year after year. I add a special note of thanks to auction sponsors Lindsey Brown of Pifer’s Auction & Real Estate, Alerus, and Kelley Bean. Because of their generosity, Mayville State and its students will experience even greater benefits as a result of the annual Farmers Bowl activities.”

Top: A nice group of runners and walkers of all ages participated in the Farmers Bowl Field Frenzy 5K run/walk. 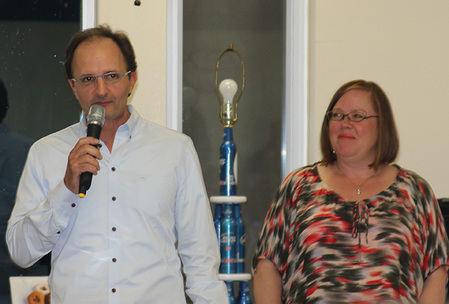 served up their legendary hot dogs and corn on the cob during the traditional feed held after the parade and prior to the Farmers Bowl football game.

Fourth: This acrylic painting of Mayville State’s Old Gym by Mayville State graduate Doug Anderson was painted on flooring that was removed from the facility which has been demolished to make new for a new Health and Physical Education expansion. It was a popular item on the Farmers Bowl live auction in which Butch Lovas of Blanchard, N.D. and Wayne Trottier of Northwood, N.D. volunteered their services as auctioneers, as they have done nearly every year in the 19-year history of the Farmers Bowl Auction.

Fifth: Mayville State students Liza Hoglo (left) and Nina Gurguin attended the Farmers Bowl Auction and thanked those in attendance for their support for Mayville State University and its students. Both girls are scholarship recipients.

Bottom: Chef Tony, “The Lost Italian,” (left) and his wife, Sarah, Nasello attended the 2015 Farmers Bowl Auction, and enjoyed the evening with the Mayville-Portland folks who will host a dinner party that was auctioned in the live auction. Tony will be the star of the culinary event which will be held at the home of Brent and Bonnie Freeland. During the auction, Chef Tony gave away his cookbook, Party on the Prairie, to the Farmers Bowl Auction attendee who could tell him the state beverage of North Dakota. Erin Risovi won the cookbook with her answer of milk.