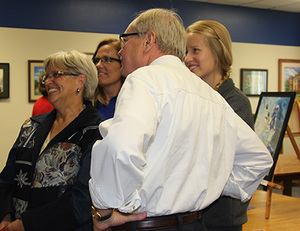 For Mayville State alumni and friends, October 3 through 5 was a weekend for recognizing friends for their college athletic accomplishments, outstanding athletic coaching careers, and performing and visual arts endeavors. There was lots of reminiscing and catching up. Traditions were honored, and a common thread that binds many special folks together, “the school of personal service,” was saluted. Homecoming 2014 was also a celebration of Mayville State’s 125th anniversary, and will long be fondly remembered by those who shared in the festivities.

Alumni and friends had an opportunity to enjoy some time in the newly opened Edson and Margaret Larson Alumni and Leadership Center prior to the dinner. In addition, the work of 1974 Mayville State graduate and artist Doug Anderson, Cavalier, N.D., was on display in the Campus Center Heritage Room, where folks enjoyed an opportunity to visit with Anderson. The art show was sponsored by the Northern Lights Art Gallery. 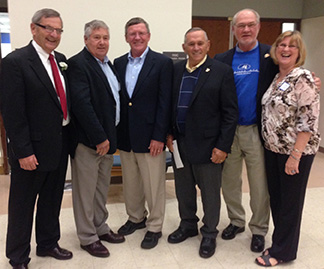 On Saturday, October 4, the traditional homecoming parade was followed by the first-ever CometFest!, which took place just outside of Jerome Berg Field prior to the homecoming football game. In spite of the cold and windy weather, young and old alike enjoyed inflatable games, yard games, a farmers market, a kids pedal tractor pull, music, and more. Winners of the coloring contest for kids sponsored by the Alumni Association were Maysa Larson and Hannah Ostlie of Mayville. The Comets volleyball team defeated Presentation College in a game held at the Lewy Lee Fieldhouse.

The Mayville State football team suffered a heartbreaking one-point loss against Presentation College in the homecoming game. Alumni and friends had a chance to warm up and enjoy a picnic-style supper at the all-alumni homecoming reunion which followed at the Mayville Golf Course. 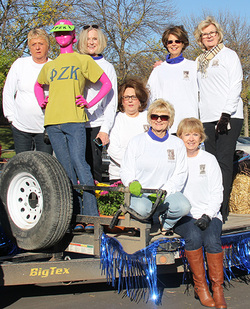 Then it was time to rev things up with the fabulous Downtown Horns at the 125th Anniversary Homecoming Dance held at the MSU Campus Center Luckasen Room. Alumni and friends had a blast while dancing the night away with their Mayville State friends.

The honoring of the newest inductees to the Mayville State University Performing Arts Hall of Fame, as well as the traditional MSU Music Department homecoming concert were a grand finale for a fantastic weekend for Mayville State alumni and friends. The concert was held Sunday afternoon, October 5, in the Classroom Building Auditorium. Kris Eylands, Grand Forks, N.D., Jeff Nelson, Northwood, N.D., Bob Sylskar, Mayville, N.D., and Dr. Anthony Thein, Minneapolis, Minn. comprised the second group of distinguished individuals to be inducted into the Performing Arts Hall of Fame.

A powerful performance by the 125th anniversary reunion choir, directed by MSU Music Director Mike Bakken and accompanied by Greta Paschke, was the icing on the anniversary cake! The Classroom Building Auditorium stage was filled with vocalists, some of whom are members of the current Mayville State concert choir, and others who are alumni and friends who joined them in four numbers. The group performed in honor of Mayville State’s quasquicentennial, which is officially on November 2, 2014. Many in the auditorium were brought to tears during the performance of “Coming Home,” Beautiful Savior,” and “Battle Hymn of the Republic.” Audience members joined the choir in rousing renditions of “Alma Mater” and “Hail to the Comets,” the final numbers performed. 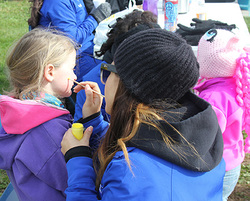 Homecoming 2014 culminated with a social to honor the Performing Arts Hall of Fame inductees. Hosted by the Alumni Association board, the social was held immediately following the concert in the MSU Campus Center Luckasen Room.

“Homecoming 2014 was a very memorable time,” said MSU Director of Alumni Affairs Beth Swenson. “It was a heart-warming celebration of what makes Mayville State University special - the people. It is our privilege to provide opportunities for our alumni and friends to be recognized for their success and to stay connected. We’ve had a wonderful time connecting with so many alumni and friends as we’ve marked Mayville State’s 125th anniversary over the last year, and we look forward to continuing that tradition long into the future.” 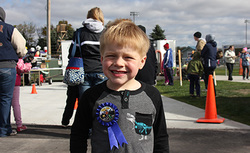 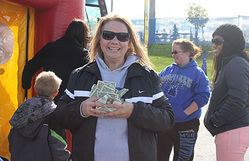 Fourth: Some of the Mayville State friends who gathered to honor Athletic Hall of Fame Inductee Richard Fugleberg took time for a photo op. Pictured from left to right are Richard Fugleberg; Dean Bowyer; Gil Rud, Portland native and former commander of the U.S. Navy Blue Angels; Mayville State graduate and retired U.S. Marines Lieutenant General Emil “Buck” Bedard; Martin Johnson; and Mary Iverson.
Fifth: These ladies become lifelong friends while they were students at Mayville State in the 1970s. Most of them lived in Berg Hall, where they formed their own sorority, ÞZK. The group enjoyed a fun-filled homecoming weekend, which included participating in the parade.
Sixth: The Mayville State cheerleaders painted faces during the CometFest! 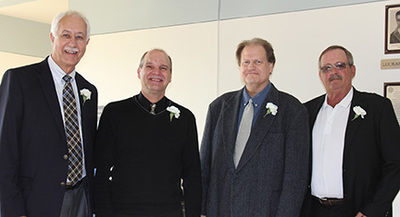 Seventh: Jayd Larson is proud of the first-place ribbon he won in the pedal tractor pull organized by B & S Pedal Pulls during the CometFest! Kids who qualified are now eligible to compete in the state pedal tractor pull next summer.
Eighth: Dawn Huard has her hands full of cash that she collected when she won a chance at 30 seconds in the 97 KYCK/Z947 cash cube which was set up outside of Jerome Berg Field during CometFest! on October 4.
Ninth: Inductees into Mayville State’s Performing Arts Hall of Fame were recognized during the homecoming concert. This year’s inductees are (l-r) Dr. Anthony Thein, Minneapolis, Minn.; Kris Eylands, Grand Forks, N.D.; Bob Sylskar, Mayville, N.D.; and Jeff Nelson, Northwood, N.D.
Tenth: Members of the 125th anniversary reunion choir filled the stage in Mayville State’s Classroom Building Auditorium. Alumni and friends joined the current Mayville State Concert Choir to perform in celebration of Mayville State’s 125th anniversary. The group’s powerful performance was enjoyed by a near-capacity audience in the Auditorium Sunday afternoon, October 5.